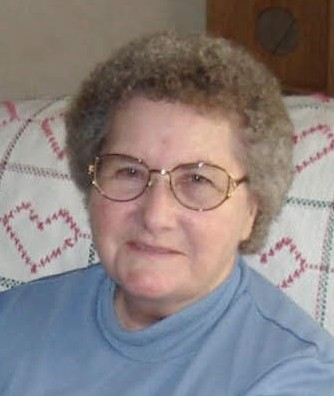 June Rogers Carrell, age 92, of Roosevelt, passed away November 6, 2019, at her daughter, Marilyn Snow’s, home in St. George.
She was born June 21, 1927, in Mt. Emmons, Utah, to George Arthur and Elva Ray Dicey Lister Rogers.  She had two sisters and two brothers.   She was the second child born in the family and helped on the farm feeding and milking the cows.
June met Kenneth W. Carrell before he went into the army.  She would go down to Upalco to his parents, Fredrick & Winifred Williams Carrell’s, home and help them while he was deployed.  Ken and June were married for time and all eternity on October 15, 1946, in the Salt Lake Temple.
They made their first home in Upalco, later they moved to Provo, then St. George, Monticello, Roosevelt, and recently back to St. George.
She was a good homemaker and loved her family.  She was an active member of the Church of Jesus Christ of Latter-day Saints where she held various callings.  She loved the Savior.
She had many struggles with her health in life and faced them with faith.  We love her and she will surely be missed.  She adored her grandchildren and great-grandchildren and always kept a list of them.  She used to send each a card on their birthdays and loved a visit from them.
June is survived by her husband of 73 years, Kenneth; their four children, Bobby K. (Nancy) Carrell; Marilyn (Norman) Snow, all of St. George; Paul (Denice) Carrell, Firth, Idaho; Patsy (Val) Jaramillo, Provo; 25 grandchildren, 50 great-grandchildren; and a brother, Fay Rogers, Roosevelt.
She was preceded in death by her parents, her siblings, Vera Richards, Ella Murray, and Ray Rogers.
Funeral services will be held on Saturday, November 9, 2019, at 11:00 a.m. at the Roosevelt East Stake Center, 502 N 600 E.  There will be a viewing from 10-10:45 a.m. at the church prior to the services.
Burial will be in the Upalco Cemetery

To order memorial trees or send flowers to the family in memory of June Carrell, please visit our flower store.