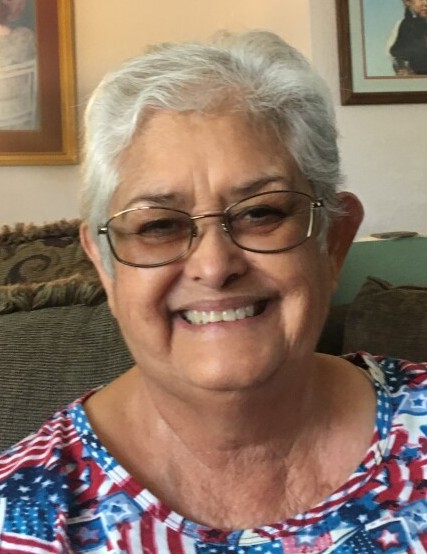 Josephine Eva “Josie” Martinez Stone, age 77, of Roosevelt, passed away December 8, 2020, at the Timpanogos Regional Hospital in Orem.
She was born March 31,1943, in Embudo, New Mexico, to Ramon and Elvira Lopez Martinez.  She married H. Guy Stone, III, on June 9, 1989, in Pleasant Grove and they were sealed in the Provo LDS Temple on May 15, 1992.  He died on September 13, 2008.
Josie worked a bank teller most of her life.  She enjoyed watching British Crime television, reading murder mysteries, and listening to old country music.   She looked forward to her “Sisters’ Outing” every year and going to lunch with her friends, especially Mel Hillegeist.
Josie was a member of the Church of Jesus Christ of Latter-day Saints and she loved the members of her ward.  She was the most loving, compassionate, selfless, and giving person.  She loved children and would do anything for anyone in need.  She adored her grandchildren and spending time with them was her greatest joy.   She just wanted to be with her husband, and now she has gotten her wish.
She is survived by her son, Mark Andrew Fresquez, Draper; her grandchildren whom she legally adopted, Gabe Stone, Roosevelt; Mark (Rileigh) Stone, Vernal; Simon Stone, Blanca (Jason) Hollobaugh, both of Roosevelt; 10 great-grandchildren with one on the way; siblings, Robert (Alice) Martinez; Jose (Jeannie) Martinez, both of New Mexico; Carol (Lee) Lovato, Arizona; Hilda Roybal, California; and numerous nieces and nephews.
She was preceded in death by her husband, Guy Stone; parents, Ramon & Elvira; a sister, Lea McClure; and brothers, Ramon & Ernesto Martinez.
Due to COVID-19, the services are for immediate family only, but the funeral service will be live-streamed at the link below. Funeral services will be held on Monday, December 14, 2020, at 11:00 a.m. at the Roosevelt Central Park Chapel (formerly the Roosevelt 1st and 4th ward Chapel located at 32 S State Street).  There will be a viewing one hour prior to the services at the church.
Burial will be in the Roosevelt Memorial Park.

To order memorial trees or send flowers to the family in memory of Josie Stone, please visit our flower store.