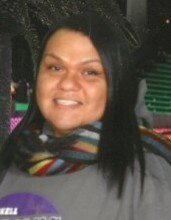 The funeral will be live-streamed here today.
Joshua Justin “Josha” Jenks, age 41, of Ft. Duchesne, passed away May 30, 2021, at home after a longtime illness.
He was born May 20, 1980, in Roosevelt, to Richard Ace Jenks, Jr. and Judy Faye Thompson.  He had a longtime companion, Shawn Zuehlsdorf.
Josha had attended Haskel University where he received his Bachelors of Business Administration.  He worked as a manager for the Ute Plaza, as a dispatcher for BIA Law Enforcement, and recently as a nail technician.  In his younger years, he enjoyed going to the rodeos where he barrel raced.  He was a big fan of  Beyonce and Spice Girls and attending musicals, his favorite being “Wicked!”  He really liked to garden, sing, explore, hike in the hills, bake, and make caramel popcorn.  He was an outgoing person with a big personality who loved being with his family and friends and his beloved dogs, “Nuffy” & “Rocky”.  He was very determined, a hard worker, and always stayed positive – he was an inspiration to those who knew him.
Josha is survived by his companion, Shawn; father, Richard Jenks Jr., Sunshine Acres; siblings, Samantha (Marty) Nephi, Randlett; Renia (Troy) Thompson, Roosevelt; Issac Serawop (Sweetwater Reyos), Roosevelt; Brandie Serawop (Jake Manning), Randlett; Kathleen (Jessica) Jenks, Vernal; aunts and uncles, Fabian Jenks (Alfonzo Reyos); Tammy John, Margie (Richard) Whiteplume, Lance Thompson, and numerous nieces, nephews, and cousins.
He was preceded in death by his brother, Robbie Jenks; sister, Loraine Jenks; mother, Judy; grandparents, Katherine & Richard Jenks, Sr., Tommy Thompson, Lucille McCook; aunts and uncles, Melonie Wyasket, Lyle & Shane Jenks; Trevor John, Gloria, Willard, Willis, Tim, Frederick, & Kent Thompson; Burnell Arrive; Larry McCook; and best friends, Monte & Monette Serawop.
Funeral services will be held Friday, June 4, 2021, at 10:00 a.m. at the Randlett Chapel of the Church of Jesus Christ of Latter-day Saints.  He will be taken to his home (7650 E 250 S, Sunshine Acres, Ft. Duchesne) on Thursday at 3:00 p.m. for a wake.
Burial will be in the Randlett Cemetery.

To order memorial trees or send flowers to the family in memory of Josha Jenks, please visit our flower store.