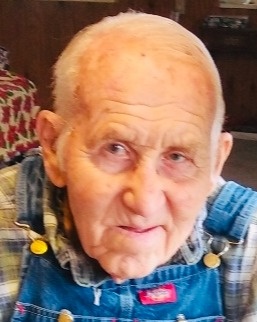 Joseph was born on October 2, 1927, in Provo, Utah, to Mose Bert and Dora
Emmons Williamson.  He was married on June 16, 1980, to Marelda Harper.  She passed away December 5, 2014.
While growing up in Provo, Joseph attended Lincoln High, but joined the Army
before graduation. He later earned his GED. After the army, He worked hard to provide for himself and he was a very good provider for his family. He took on a job at the Tooele Army Depot. After retirement, he and his wife moved out of the city and bought some farm land. He started farming, a passion he worked at until he was 85 years old. He loved the outdoors, hunting each October, and doing donuts in his snow covered fields on his quad. He was an early riser, always dressed in his overalls and ready for the day by 6:30 AM.  He took good care of the hummingbirds and absolutely loved his cats, “Tippy” and “Mud.”
Joseph loved his family. He always remembered to send a personal birthday card
and Christmas card to each of his children, grandchildren, friends and siblings.
Joseph is survived by his children, Rae Lynn Dennis, Dan (Regina) Hill, Reed (Mindy) Hill, Spence (Janice) Hill, Melissa (Steve) Kozak, Kari (Vincent) St. Louis;
siblings, Merea, Phyllis, Janey, and Marianne.
He was preceded in death by his parents; his wife, Marelda; sisters Donna and Carma; and his brother Elwood.
Joseph was cremated, and a graveside service will be held on Friday, October 7,
2022, at 11:00 AM, at the Provo City Cemetery, with military honors presented by the
Utah Army National Guard.