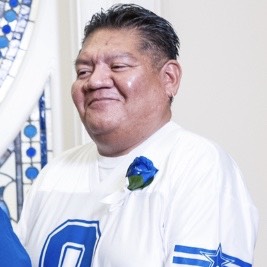 Jonathan Larry Blackhair, age 46, of Vernal, passed away October 30, 2019 at his home.
He was born February 29, 1973 in Roosevelt to Larry Alan Blackhair and Claria Pinnecoose.
Jonathan was on the varsity basketball team at Mount Vernon Academy in Murray, Utah and then went to culinary arts school with Job Corps and later with the South Western Indian Polytechnic Institute.  He enjoyed playing video games, backpacking, camping, traveling, listening to music and experiencing new things.  He was an avid fan of the Dallas Cowboys.  He was a Sundancer for 23 years and participated in Pow Wows and the Bear Dance.  His favorite thing to do was spoil his daughters and his nieces & nephews.
Jonathan is survived by his daughters, Morgan Torese Blackhair & Jade Esther Blackhair; grandchildren, Rainbow Cloud Murdock; Redtail Martinez; parents, Larry Blackhair and Clari “Cookie” Pinnecoose; siblings, Elton Blackhair, Joseph Bryce Briden, William Ervin Briden, Alan Cullen Briden, and numerous, aunts, uncles, nieces, nephews, and cousins.
He was preceded in death by his grandparents, Esther Arrive, Guy Pinnecoose, Sr., Ruby Atwine, and Johnny Black.
Funeral services will be held on Monday, November 4, 2019 at 10:00 a.m. at the Randlett Community Building.  A wake will be held at the Pinnecoose residence in Randlett after 4:00 p.m. on Sunday.
Burial in the Randlett Cemetery.

To order memorial trees or send flowers to the family in memory of Jonathan Larry Blackhair, please visit our flower store.