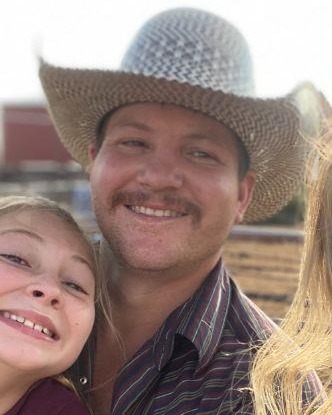 The funeral will be live-streamed and can be viewed HERE.

John James Melo, age 31, of Gusher, Utah, passed away on Oct. 22, 2022.
He was born July 5, 1991, in Price, Utah, to Steven and Joanna Melo.  He unofficially married his high school sweetheart, Kayleigh Melo, on December 1, 2009, and Kaydence John Melo was welcomed into the world on  March 29, 2010.  They were officially married in 2017.
John always lived his life to the fullest. He enjoyed spending time with family and friends, and his wife and daughter were the light of his world. He started in the rodeo lifestyle when he was young, riding bulls and saddle broncs. He liked the rodeo so much that he started doing rough stock contracting. He was a jack-of-all-trades, and if he wasn’t on the back of a horse, he was shoeing one.
John was one of the kindest people you would ever meet. He would give the shirt off his back to help anyone in need. He was always the life of the party, making everyone laugh.  He lived to provide for his family, whether it be in the oilfield, cowboying, or wrangling animals on movie sets. He was going to do whatever he had to, to make sure his family was taken care of.
John is survived by his wife, Kayleigh Melo; daughter, Kaydence; parents, Steve Melo and Joanna Melo; siblings, Steve (Stephanie) Melo, Suzanna (Hondo) Sloan, Wesley (Mary) Ralph, Hanna (Travis) Warren, William (Sunny) Melo, Julie (Brandon) Hodges, Angie (Jacob) Hintz, Shirley Melo (Cruz Soto); and many aunts, uncles, cousins, and close friends.
John was preceded in death by his grandparents, John and Shirley Melo, Mary Jane Ryan, ; uncles, Ronald Melo, and John Andrew Melo; aunt, Terry Ryan; and cousins, Tommy Melo, John Andrew Melo Jr., and Andrew Melo, Sr.,
Funeral services will be held on Saturday, October 29, 2022, at 11:00 a.m. at the Duchesne County Centennial Events Center.  There will be a viewing that morning from 9-10:45 a.m.
Following the service, he will be cremated.

To order memorial trees or send flowers to the family in memory of John James Melo, please visit our flower store.