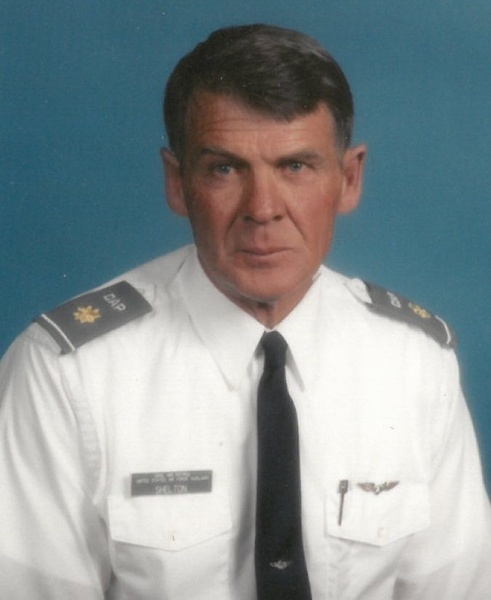 Joseph Don Shelton, age 71, of Roosevelt, passed away January 30, 2019, at his home.
He was born on February 1, 1947, in Roosevelt, to Don and Edna Jennetta Case Shelton.  As a young man, he was a very active Boy Scout and received his Eagle Scout Award.  He graduated high school and immediately went into the US Marines where he was stationed at Vietnam during the Vietnam War.
He married Nancy Rae Betz and they were later divorced.  He married Darelyne Laurene Foster on February 22, 1982, in Roosevelt.
Joe was a logger all of his life and loved to have his boys with him on the mountain.  He was an artist with the chainsaw and was smooth in a semi-truck when hauling logs.   He was a “Mountain Man with Class” who had also spent quite a bit of time in the hills prospecting for gold.  His acquaintances in that field gave him the nickname of “Joesky.”  He has worked for the Ute Tribe Water Service, and was a pilot, serving in the Civil Air Patrol for many years.  He was often on search and rescue missions and he had great compassion and comforted the families who had loved ones who were being rescued.  He was an avid fisherman, and also had a unique way with animals – his gentleness was felt by them which allowed him various close encounters with wildlife.  Everything he did was with class and integrity.
He had a great love of the Gospel of Jesus Christ and was a member of the Church of Jesus Christ of Latter-day Saints.  He was so happy to attend the temple and be sealed to his parents – it was one of the happiest days of his life.  He had a great love of his country and because of his service in the Military, he was so grateful for those who were currently fighting in the various conflicts around the world.
He loved his kids and grandkids and he pretty much talked about them non-stop. His crazy sense of humor will be deeply missed.
Joe is survived by his wife, Darelyne, of Roosevelt; children, Casey (Natalie) Shelton, Vernal; Wade Shelton (Sonja Aliesch), Kelly Shelton (Frankie Niot), both of Portland, Oregon; Andrea Upton (Hoss Dieter), Roosevelt; 14 grandchildren, 13 great-grandchildren; special friends, Brad & Peggy Draper; and numerous nieces and nephews.
He was preceded in death by his parents; brothers and sisters, Anona Rasmussen, Mary Wardle, Geniel Burrell, Betty Mecham, and Norton Shelton.
Funeral services will be held on Saturday, February 9, 2019, at 1:00 p.m. at the Roosevelt Stake Center of the Church of Jesus Christ of Latter-day Saints (447 East Lagoon Street).  There will be a viewing on Friday from 6-8 p.m. at the Hullinger Mortuary and at the church on Saturday from 12-12:45 p.m.
Burial will be in the Bluebell Cemetery with Military Honors provided by the Roosevelt American Legion and the Patriot Guard Riders.
A donation to KLiC (Keeping Love in Communities) or the American Cancer Society in honor of Joe would be greatly appreciated.

To order memorial trees or send flowers to the family in memory of Joe Shelton, please visit our flower store.