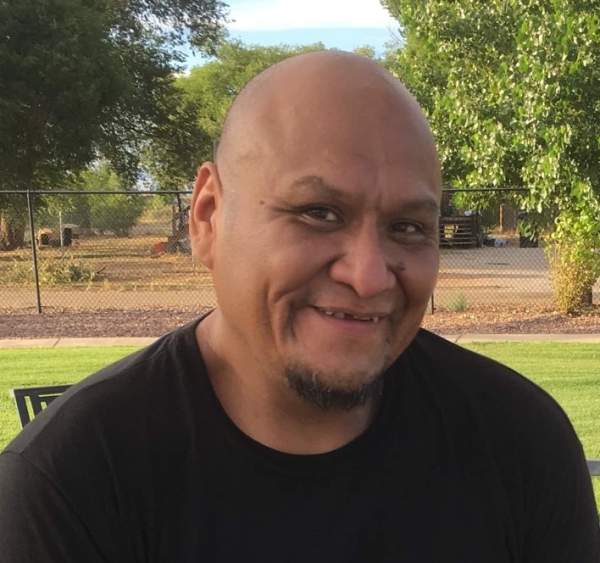 Jim Nephi Redfoot, age 47, of Cedarview, passed away September 17, 2019, from injuries sustained in an automobile accident.
He was born August 27, 1972, in Roosevelt, to Marvin James Redfoot, Sr. and Carlee Nephi.  He married Raelyn A. Tabbee on March 30, 2006, in Ft. Duchesne.  They later separated.
He earned a degree in sociology from Salt Lake Community College.
Jim worked for the Ute Indian Tribe in various labor positions in carpentry, welding, and automotive.  He was a Sundancer and the traditional ways were important to him.  He enjoyed guns, riding his dirt bike, hunting, fishing, being in the mountains, and giving hugs.  He liked to draw and was a talented tattoo artist.  He loved his kids & grandkids, and was always laughing and smiling.
Jim is survived by his children, Corie Redfoot (Sandrina Williams), Pennsylvania; Kimirah Redfoot, Alexander Uncapiuke, both of Ft. Duchesne; grandchildren, William Jim, Joe Sharp, Maxine Uncapiuke; companion, Wynette Poleviyoama; siblings, DelJean (James) Libby, Washington; Anotonio Redfoot, Neola; Marvin Redfoot, Jr, Neola; aunt Linda (Roy) Ankerpont; uncle, Julian Redfoot; numerous nieces, nephews, aunts, uncles, cousins.
He was preceded in death by his parents; his grandparents, Roger & Jane Redfoot, Rudolph Nephi, Bernice Williams.
Funeral services will be held on Monday, September 23, 2019, at 10:00 a.m., at the Ft. Duchesne Community Building.  There will be a wake at his home in Cedarview after 2:00 p.m. on Saturday.
Burial will be in the Ft. Duchesne Cemetery.

To order memorial trees or send flowers to the family in memory of Jim Nephi Redfoot, please visit our flower store.