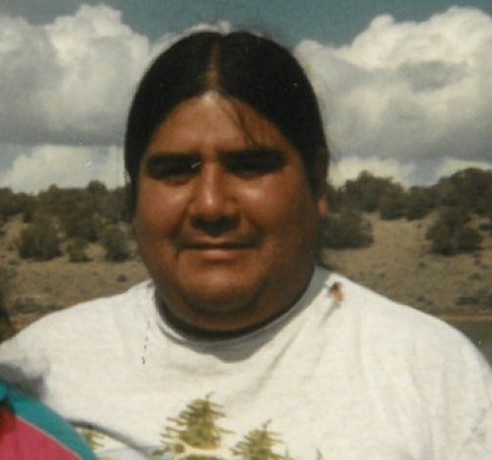 Jerry “Blood” Reed, age 56 of Whiterocks, passed away March 5, 2020, at his home from a long illness.
He was born May 1, 1963, in Vernal, to Louis Russell and Lillian Rose Duncan Reed.  He married his best friend, LeAnn Adele Thompson on June 26, 1985, in Ft. Duchesne.  She died January 6, 2019.   They had been together for over 40 years.
Jerry worked as a ranch hand and as a mechanic.  He enjoyed the outdoors, fishing, hunting, camping, and working on his cars - especially his old ‘67 Chevy Nova.  In his younger days he attended Peyote Meetings, Sundances, and liked to watch his kids and grandkids at the Pow Wows.  He had a great sense of humor, loved to tease, and his laughter could be heard from far away.  Everyone he met immediately liked him.  His greatest joy was spending time with his grandkids.
Jerry is survived by his daughters,  LuAna Thompson, Ramalda Reed-Mountainlion, Jerilynn Reed (Terrance Taveapont), Talia Reed (Steven Mata), adopted son, Ralph Tallbear; grandchildren, Graci, Cebron and Jace Mountainlion, Lilli and Kymani Starr; siblings, Robin Reed, Judy Pargeets; aunts and uncles, Luke Duncan, Franklin Reed, Stuart Reed, Madeline Martinez, Margaret Wissiup, Cordie Secakuku, Aldora Duncan, Delia Duncan; and numerous nieces, nephews, cousins, and sisters-in-law: the Redfoot Girls.
He was preceded in death by his wife, LeAnn; aunt Jean Phelps who helped raise him; his parents; his grandparents, Ivan & Clara Chegup Duncan, Ilois Reed, Ezilda Hendricks;  sister, Iva Reed; cousins, Barry and John Reyos, Lasal Reed; uncles, Clifford Duncan, Robert Reed, Donald Reed; and aunt, Delilah Duncan.
Funeral services will be held on Monday, March 9, 2020, at 10:00 a.m. at the Whiterocks Community Building.  There will be a wake at his parents home, the Reed residence, in Whiterocks on Sunday after 3:00 p.m.
Burial will be in the Reed Cemetery.

To order memorial trees or send flowers to the family in memory of Jerry "Blood" Reed, please visit our flower store.