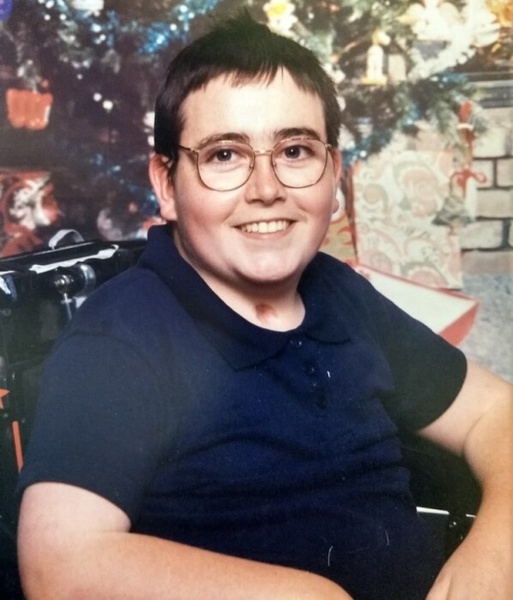 Jeffrey Robert McIntyre, 39, unexpectedly departed this mortal sphere Monday, August 10, 2020, in Salt Lake City, Utah, at the University Hospital Medical Center, due to lung failure brought about by aspiration.
Born May 19, 1981 in Longmont Colorado, Jeffrey was adopted at age 7 by Geoffrey and Sherry McIntyre in Magna, Utah. A few years later, a most uncommon stroke in the brain stem left him largely quadriplegic. After 20 years in Charlotte, North Carolina, where Jeffrey graduated from Independence High School, the family moved to Monticello, Utah. In a move towards eventual independent living, Jeffrey moved to Blanding; however, a pernicious bed sore led him to rehab centers in Salt Lake City.
Jeffrey’s most endearing qualities are difficult to articulate: everybody always felt at ease in his presence; he was always good natured and kind, despite having so many cards stacked against him. He liked to tease. For example, knowing Mom’s aversion to snow, he would go quiet, then say: “Mom, snow …. SNOW!” Or, after Mom saw a show about how hot dogs are made, he would say: “Mom, let’s eat some hot dogs. Delicious!” It’s difficult for anybody to remember a time when he didn’t have a smile on his face.
He loved animals and dogs in particular. “Alice”, a stray that adopted us, often slept with Jeffrey and stood guard. Once he tried petting a gold fish, but it didn’t work out so well for the fish … He enjoyed playing Final Fantasy video games, eating out, going to the movies, and especially visiting with friends. He had a special love for the temple and went as often as occasion permitted.
Our sadness and shock are tempered by the sure knowledge that he has undoubtedly been greeted by his grandparents (Sherry's parents) Gerald and Maurine Murphy, as well as by his Savior. He is now freed from his crippled body and is able to move for the first time in decades! He has one sibling, Sarah McIntyre.
Funeral services will be at 12:00 p.m. on Saturday, August 15 at Hullinger Mortuary, 457 East 300 North in Roosevelt, Utah. A viewing will begin at 11:00 a.m.
Interment will be in the Roosevelt Memorial Park.

To order memorial trees or send flowers to the family in memory of Jeffrey Robert McIntyre, please visit our flower store.