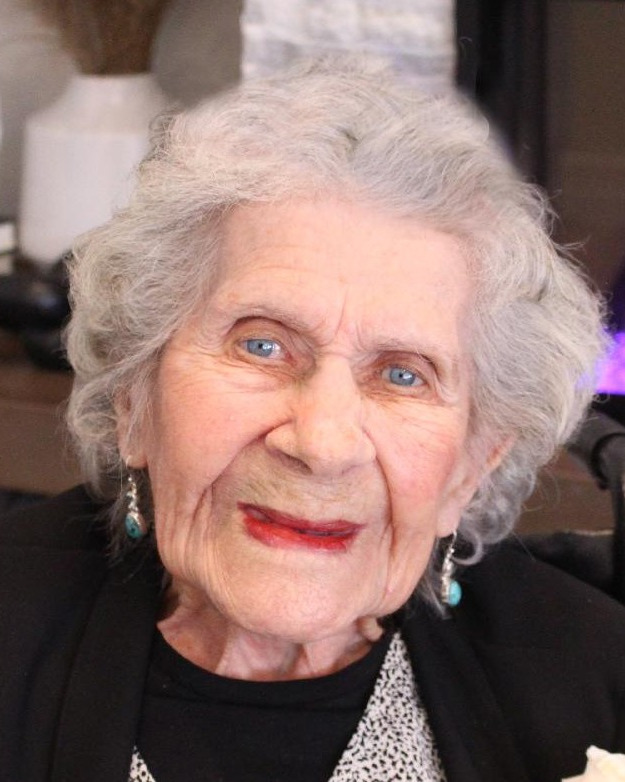 The funeral will be live streamed and can be viewed HERE.

On Saturday, December 10, 2022, Jeanne Marie Crumbo Labrum, loving wife, mother of 5, grandmother of 20, great-grandmother of 45, and great-great-grandmother of 3, bless her heart, was released from her earthly life at the age of 100 years.
She was born on March 9, 1922 in Fort Duchesne, Utah the third daughter of the late Albert and Ruby Leona Grimsley Crumbo.  She was a member of the Episcopal Church.
She loved her childhood in Fort Duchesne where the family home was large and surrounded by large trees, and the tennis courts were close by.  Her favorite pastime activities were tennis, in which she excelled, and hanging out with her best friend and cousin, Rose.  They were often found horseback riding or on the tennis courts.  Tennis would remain an important part of Jeanne's life.  She excelled scholastically, was senior class president, was active in student government, and was a member of Altera High School band where she played the E-flat alto saxophone.  Jeanne also possessed a talent for art.
After high school Jeanne attended and graduated from Stevens-Henager College in Salt Lake City.  She was employed at the Ogden Army Arsenal, Remington Arms, and Aurerbach's Department Store.  During this time, she lived at the Beehive House and Ester hall, which were boarding homes for young women working in Salt Lake City.  Shortly after the end of World War II, Jeanne married Kenneth Labrum on Christmas Day, December 25, 1945,  in her family home.  Kenneth and Jeanne resided in Roosevelt and were active in the community.  Jeanne worked for Roosevelt City and later the US Forest Service for many years.
After the passing of Kenneth, on November 4, 1981 Jeanne moved to Vernal in 1988 to be near her three sons, Dirk, Craig, and Casey.  When her health began to fail, Casey moved into her home to help care for her.  The three boys became her primary care givers for much of her later life.  She became a resident of the Uintah Basin Villa at age 99 and resided there for 20 months.
She is survived by her five children, Connie de Mik (Robert), Becky Fortie (Keith), Dirk Labrum (Shuzhen), Craig Labrum (Michelle), and Casey Labrum, along with 20 grandchildren, 43 great-grandchildren, and 3 great-great grandchildren.
Jeanne was preceded in death by her parents, Albert and Ruby Crumbo; brother-in-law, Willard S. Murdock; her siblings, Bonnie May Crumbo, (1915-1917) and Shirley Lynne Crumbo Murdock, (1920-2014); niece, Pamela Ann Murdock Phillips Mueller; son-in-law, Herman Robert deMik; and great grandson, Taegan James Brown.
The Labrum family wishes to express their appreciation and gratitude to the caregivers at the Uintah Basin Villa for the exceptional care they rendered to our mother during her stay.
Services  will be held on Thursday, December 15, 2022 at the Stake Center located at 447 E. Lagoon Street in Roosevelt.  A visitation will be held for family and friends from 10:00 am -11:15 am,  with a Celebration of Life following.   Interment will be in the Roosevelt Memorial Park immediately following the service, where Jeanne will be interred next to Kenneth, her beloved husband of 36 years.

To order memorial trees or send flowers to the family in memory of Jeanne Labrum, please visit our flower store.