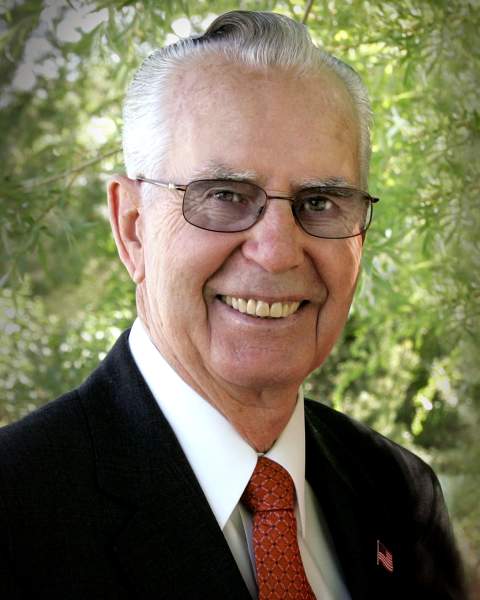 Jay C. Gates passed away in his home in St. George, Utah, on the night of August 24, 2022, at the age of 86.  He was surrounded by his loving family.
Jay was born September 26, 1935, in Heber City, Utah to Charley Gates and Mary Charlotte Frisby. He married Sheryl Drollinger on May 2, 1956, and they were later sealed in the Salt Lake Temple on October 27, 1984.
Jay was the most loyal, supportive, hard working and generous man.  He loved his family, his friends, his community and his country.  He was proud to have served in the Army during the Korean War.
Jay owned Jay Gates Chevrolet in Roosevelt, Utah for 25 years. He served on the Roosevelt City Council for 4 years and was an avid supporter of sports programs, both city-wide and in the schools. Coaching baseball and being an umpire brought him a lot of joy for many years.  Jay spent the last 28 years of his career as the best dang CPA in the Uintah Basin. He loved his time at the CPA Firm in Vernal.
Jay was a straight shooter! You never had to guess what he was thinking because he would tell you.  He cared so much about people and made everyone feel uniquely special. He gave the best advice and people respected his opinions. Jay was his family's #1 fan and would brag to anyone who would listen about his kids and grandkids.  He had such a special relationship with each of them.  He jiggled the change in his pocket like it was an Olympic sport! He was the luckiest son- of-a-gun (if there was a raffle he would win it), stubborn as a bull, and raised hell (in a good way) for over eight decades.  Together with his family he loved to camp, hunt, fish and drink Diet Coke!
Jay is survived by his beautiful wife of 66 years, Sheryl; four children: Ken (Bonnie) Gates, Terri Monks, Ron (Julie) Gates, Rick (Kari) Gates; 14 grandchildren; 25 great-grandchildren; and his sister, Edith McClellan, of Provo, Utah.
He was preceded in death by his parents; his siblings, Arlen Leroy Gates, Ronald Warrick, Carolyn Bruce, and Mildred Leong.
Funeral services will be held Wednesday, August 31, 2022 at 11:00 am at the Roosevelt Stake Center of the Church of Jesus Christ of Latter-day Saints, 447 E. Lagoon Street, Roosevelt, Utah.  A viewing will be held that morning from 9:30-10:45am.
Burial will be in the Roosevelt Memorial Park with military honors.
The family suggests that you make a donation to a charity of your choice in Jay’s memory.

To order memorial trees or send flowers to the family in memory of Jay C. Gates, please visit our flower store.