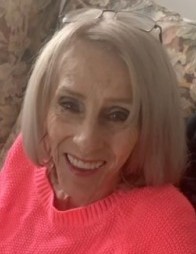 Janet Abegglen, age 72, beloved daughter, sister, mother, and grandmother, passed away June 18, 2021, in her home in Salt Lake City, Utah, surrounded by her family. She was born July 18, 1948, in Roosevelt, Utah, to Willis & Marie Warburton Abegglen.  She married David Burton and had five children, solemnizing their marriage in the Salt Lake City Temple. They lived in many places where she thrived and made many friends. They were later divorced. Janet was a personal assistant to Mrs. Arlene Jones for many years in Vernal, Utah. She was also an excellent waitress. She lived with her son Kelly for a time in St. George, Utah, where she was a caregiver for seniors. She then moved to Salt Lake City to live with her sister, Sharon, Janet's biggest supporter. They had a fun time taking care of each other. Janet's favorite things were chocolate, Coca Cola, and McDonald's.  Her greatest love, however, was the Gospel of Jesus Christ. She was an active member of the Church of Jesus Christ of Latter-Day Saints and loved her Savior Jesus Christ and her Father in Heaven. She was a very faithful servant and served in many callings she dearly loved and learned from.  Her greatest joy was her family. Janet is survived by her children Jason, Kelly, Misty, and Candice; 11 grandchildren; siblings Shell, Sharon, Welly, Rhonda, and Lee. She was preceded in death by her daughter, Tylynn Alexander, a great loss for Janet; parents; and two grandchildren, Blake Christiansen and Dalton Grant. Janet endured many trials so graciously through her faith and will be sorely missed. We love you, Jan. She will be buried in the LaPoint Cemetery with her parents, daughter, and grandson.  The graveside service will be held on Tuesday, June 22, 2021, at 10:00 a.m.
To order memorial trees or send flowers to the family in memory of Janet Abegglen, please visit our flower store.