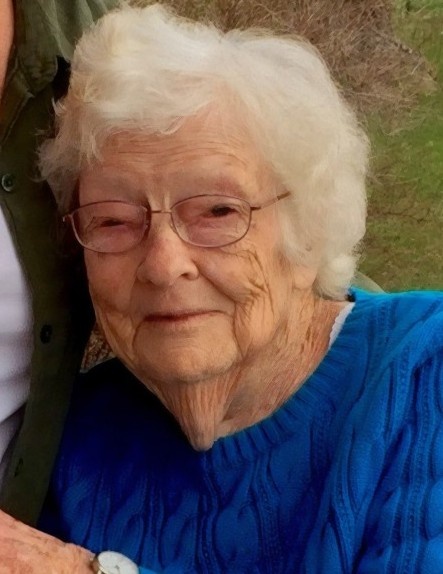 Jane Anderson Thompsen, who at 95 was still grateful to enjoy and sense the wonder of it all, passed peacefully away on December 30, 2019.
Jane was born in Zebra, Missouri on January 8, 1924, to Walter and Dorothy Anderson. A child of the Depression, her family moved several times across country, including Arizona, California and Mt. Pleasant, Utah. She graduated high school from Wasatch Academy in 1941, followed by graduation in 1943 from Westminster College and Occidental College in 1945. She earned her Master's in Special Education at the University of Missouri in 1965.
Jane married Charles Richard Thompsen, an Air Force pilot recently returned from WW II, in Mt. Pleasant, Utah on August 16, 1946. That began a great venture with over a dozen addresses across the next few decades.  Their initial assignment was in Texas, where the first three children were born- Charles Ray, David and Christy.  They were then stationed in England, then Norway where son Thomas was born, followed by Selfridge AFB in Michigan, and Twin Falls, Idaho, where son James was born. Following Richard's retirement from the Air Force, the family moved to Missouri.  In 1973, Jane and Charles moved to Roosevelt (Ioka), Utah where they started their next phase of adventures.
A teacher for most of her life, her work favored children with varied disabilities, handicaps or special needs. The day after Jane and Charles moved to Roosevelt in 1973, Jane went to work at Con Amore School, serving children with severe multiple disabilities and developmental delays. Working with county and state governmental officials, as well as Utah State University, she developed programs to meet the varied needs of a growing student population.
After seven years at Con Amore, Jane took a sabbatical with husband Charles to Europe to pursue additional training and research involving "behaviorally disordered" students. When she returned to the Uintah Basin, she requested the Duchesne County School District start a school for students who could not succeed in mainstream classes due to behavioral problems. Initially two mobile trailers comprised North School.  When a new Middle School was planned, the Thompsens sold a portion of their property in Ioka to establish a new facility which became known as Thompsen School.
In the late 1980's Jane, along with Ute tribal leaders, local and state law enforcement, mental health care workers and social service professionals determined the need for a Family Support Center.  Jane was the primary founder of the first Family Support Center of the Uintah Basin which opened in Ft. Duchesne, offering 24-hour respite care and emergency shelter for children birth through eleven.  The Family Support Center, now in Roosevelt, provides child abuse prevention services for families in crisis.  The non-profit facility has served thousands of families for over thirty years with respite care, parenting classes and other crucial services for children and their families.
Persistently advocating more and better programs and care for families and children, Jane approached the Utah Attorney General's office to build the Duchesne County Children's Justice Center.  She pursued grant money, donations and approached local businesses, community leaders and citizenry to donate land, materials and labor to build the Center. And true to her belief in the good of all people, Jane arranged for local inmates to work on the landscaping.  Today, this nationally recognized Justice Center continues the good work of protecting children who have suffered abuse and neglect.  The center, designed in a home-like, child-friendly facility, has successfully been a model of the multidisciplinary approach to serving children with necessary resources such as medical exams and after care.
Jane was then approached by the late Roosevelt Police Chief Cecil Gurr to open a "Receiving Center" for juvenile offenders to be housed separately from jail. Jane immediately worked on securing grant money and community involvement to secure building space, furniture and hire a social worker to be with the children who are brought to the center.
Jane served on many area and state boards and commissions that work on the behalf of children. She championed her causes and was successful in receiving Utah and Federal support.  She received the "Woman of Achievement" award in 2003 from the Miss Utah Organization, selected unanimously from 57 candidates.  Throughout her life, Jane mentored and encouraged her many former students, teachers, staff and families.
Well into her 80's and 90's, for over 12 years she made weekly visits on Saturday afternoons to the Duchesne County Jail, meeting with the men and women; she provided a Bible message, counseling, encouragement and sometimes a scolding!  After serving their time, many have maintained contact with her through visits, phone calls and letters. She never gave up on "her children". She always insisted she could not have done it alone and a community effort ensured the success of these endeavors.
Jane is survived by her children, Charles Ray and wife Lee, Las Vegas, NV; David and wife Becky, Golden, CO; Christy, Cape Cod, MA; Tom and wife Noreen, Cape Cod, MA; and James and wife Fatima, Kearns, UT. She is also survived by seven grandchildren, Vanessa Boson, Tiffoni Thompsen, David King, Jenna Thompsen, Karl Thompsen, Glen Thompsen and Spencer Thompsen. She also is survived by great grandchildren Bo and Bella Boson, Otalee Thompsen and Olivia Jane King.
A Celebration of Life will be held at 5 pm, January 8, 2020 at the Roosevelt Crossroads Senior Center, 50 East 200 South, Roosevelt, UT. An interment service will be held at 1 pm on January 10 at Camp Williams Veterans Memorial Cemetery, 1711 South Camp Williams Rd., Riverton, UT.
In lieu of flowers, the family asks that donations be made in Jane's memory to the Duchesne County Children's Center, 136 North 500 West, Roosevelt, UT 84066, or any program of choice that serves children and families in need.

To order memorial trees or send flowers to the family in memory of Jane Thompsen, please visit our flower store.