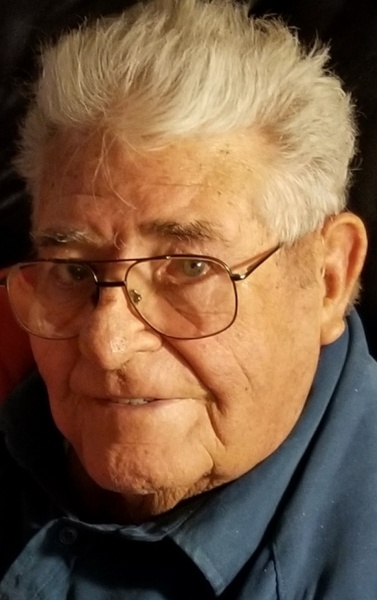 Due to COVID-19, the services are for immediate family only, but the funeral service will be live-streamed here and at the button below.  Masks are required for those attending.
Jack Clifton Rasmussen, age 92, of Ballard, passed away peacefully December 16, 2020, at his home surrounded by his loved ones.
He was born July 4, 1928, the third of eleven children, to Farrell and Verda Elder Rasmussen in Ballard.  Jack learned the satisfaction of hard work and perseverance at a young age while milking cows, hauling flour on horseback, and many other chores around his parent’s small white house down the lane in Ballard.
Jack had many jobs throughout his life, including working in the gilsonite mines, as an elevator operator at the Neff Building in Salt Lake City, working at the Highland Dairy in Roosevelt, as a school bus driver, hauled coal and mine props, built houses and then (his favorites) gathering and selling Christmas trees and owning a flower shop and landscape business.  He excelled using his creativity, resourcefulness, and passion for taking what something was and making it more beautiful.
Jack was married to Anona Shelton on June 19, 1949.  They had eight children together and lived and ran a floral in Roosevelt until their divorce.  He married JoAn Peterson on October 31, 1974, and they had two children together and lived in Sandy until her death in November of 1999.  He married LaVern Wilcock Evans on April 16, 2004, and they created a beautiful home and property together in Ballard for all of their family to gather at and enjoy.  He was fulfilling his dream of creating and beautifying the land right until the twilight of his life.
Jack enjoyed singing and creating fun songs to share with his children and grandchildren.  He was happiest when he was driving a tractor, planting a yard or field, and visiting with potential customers.  He was a master salesman and always had a vision for ways to earn a living while giving others opportunities to grow and learn new things.  In his younger days, he enjoyed going to dances, and could always have fun no matter the situation.  If something seemed hard, he’d find a way to make it easier.
Jack appreciated his mom and dad and ten siblings very much.  He passed on a love of music and good spirited fun to his children.  He is surely having a large, fun family reunion in Heaven with them and his three children who preceded him in death.
Jack loved the beauty in things and was not shy with compliments. He was always a handsome guy and looked young for his age to the end. Most importantly, he was genuine, kind and always concerned about the happiness of others.  He made us feel loved and motivated to be our best.  We will look forward to having him as our guiding angel from Heaven, just like he was here on earth.
We will work to count our blessings every day, as he did, knowing that he was the greatest blessing of ours.
Jack is survived by his wife LaVern, of Ballard; children, Larry (Kitty) Rasmussen, Lynn (Becky) Rasmussen, Ranae (Mike) Boren, all of Roosevelt; Richard Rasmussen, Whiterocks Road; Jolene Rasmussen, Ballard;  Jennifer (John) Udy, West Jordan; Jason Rasmussen, Roosevelt; step-children, Shelly (David) Richards, Draper; Chris (Sherrie) Groenemann, Nevada; Curtis Evans, Ballard; 16 grandchildren, 37 great-grandchildren; siblings, Lynn (Kathy) Rasmussen, Idaho; Barbara Wollf, South Jordan; Reed (Nidy) Rasmussen, Merrill Rasmussen, both of Vernal; and numerous nieces and nephews.
He was preceded in death by his children, Janae, Louis, and Jana; parents; brothers, Jay, Lenis, Mark & Earl; sisters, Lorrine Broderick & Carol Lee Rich; and a grandson, Tyson Boren.
Funeral services will be held on Monday, December 21, 2020, at 11:00 a.m. at the Ballard North Ward Chapel of the Church of Jesus Christ of Latter-day Saints. A viewing will be held from 10:00 - 10:45 AM at the church prior to the service.
Burial will be in the Roosevelt Memorial Park.

Due to COVID-19, the services are for immediate family only, but the funeral service will be live-streamed here and at the button below.  Masks are required for those attending.

To order memorial trees or send flowers to the family in memory of Jack Clifton Rasmussen, please visit our flower store.