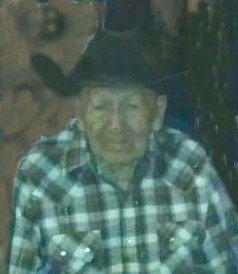 Hugh Jenks, age 94, of Arizona City, Arizona, passed away October 8, 2019, at his home.
He was born April 23, 1925, in Bitter Creek, Uintah County, Utah, to Tom Jenks and Maude Tabbee.
Hugh was a rancher and cattle farmer with his family when he was younger and mostly was a caretaker of his father.  He enjoyed riding horses, fishing, and hunting in his younger days because that was the way life was, but was not as interested in it later in life.  He enjoyed watching the NBA, gambling, watching western movies, and reading the newspaper everyday.  He practiced the Traditional Ways and liked to travel around the country watching Pow Wows.  Although he never married nor had any children of his own, he was very close to his nieces and nephews.
Hugh is survived by his sister-in-law, Lorna Jenks; nieces and nephews, Gwen (Garrick) Denetsosie, Towaoc, Colorado; Glenna Jenks (Joel Shopteese), Arizona City, Arizona; Thomas Jenks (Marilyn Russell); Jerry Jenks; Crystal Adams (Robin Reed), all of Roosevelt; grand-nieces and -nephews, Zachary Jenks, Sarah Jenks, Rachael Jenks, Isaac Jenks; Sandi & Jacob Chegup; Jace, Brinley, Rachel (Anil) AniRamRakhyani, Jacoby, and Dionee Chegup.
He was preceded in death by his parents; brothers and sisters, Glenn, Luke, Perry, Tom Jr., Cecelia, Dorothy Jenks; nephews, Derrick Jenks and David Malen.
Graveside services will be held on Monday, October 14, 2019, at 11:00 a.m. at the Ouray-Tabbee Cemetery.  There will be a viewing at the Ft. Duchesne Community building on Monday at 10:00 a.m. before the services.

To order memorial trees or send flowers to the family in memory of Hugh Jenks, please visit our flower store.