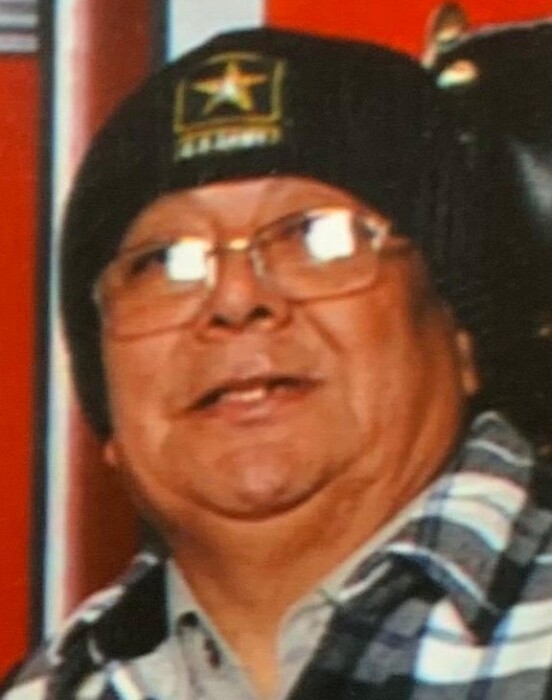 Hubert Lane Atwine, age 70, of Salt Lake City, passed away October 6, 2020, at the VA Hospital in Salt Lake City.
He was born March 1, 1950, in Ft. Duchesne, to Hugh Boyce Penningjack and Vera Atwine.  He was raised by his grandmother, Eva Atwine.  He married Teresa Begay and they later divorced.  He married Clarissa Tom, and they later divorced.  He then met the love of his life, Maxine Trujillo, and they have been together for 32 years.
Hubert served in the US Army.  He worked as an auto mechanic and auto paint technician, and the car junkyard was his favorite playground.  He enjoyed fishing, camping, going to the casino, attending and participating in Pow Wows & Sundances, and traveling.  He was spiritual and traditional.
Hubert is survived by his companion, Maxine Trujillo, Salt Lake City; children, Tonya (Eldred) Steele,Whiterocks; Leomey Atwine, Roosevelt; Lanette Atwine, Cedar City; Evette Atwine, Ogden; Natasha Atwine; step-children, Jenny Williams, John Williams, Lelia Littleman (Julio Cervantes), all of Salt Lake City; Cody Tom, Cedar City; Rosa Martinez, Ogden; 30 grandchildren, 3 great-grandchildren; a sister, Jackie (Jerry) Tapoof, Whiterocks; and numerous nieces, nephews, and other reltives.
He was preceded in death by his step-daughter, Yvonne Williams; siblings, Dorothy MountainLion, Clarice Lopez, Archilles Root, Sheila Harvey, and Robert Jack, Sr.; and a niece Flora MountainLion.
Services will be held Saturday, October 10, 2020, at the Ft. Duchesne Cemetery with Military Honors presented.  The family will eat with him and have a final viewing at the his daughter, Tonya Steele’s, home (Tribal Housing Unit 8017) in Whiterocks beginning at 11:00 a.m. Then they will proceed to the cemetery for the services.
There will be a wake after 4:00 p.m. on Friday at his daughter, Tonya’s home.

To order memorial trees or send flowers to the family in memory of Hubert Lane Atwine, please visit our flower store.