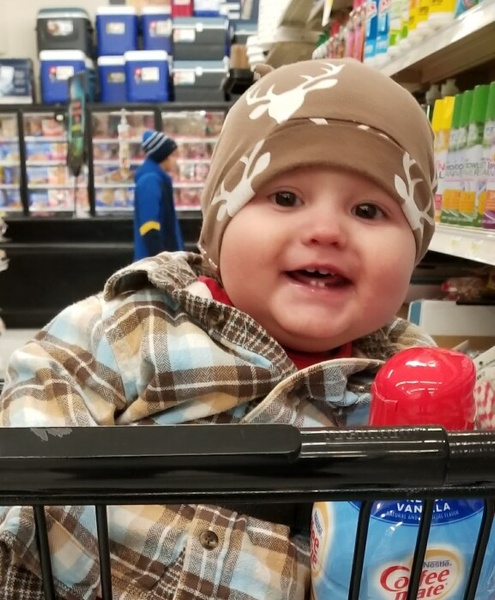 Our little hero and sweetheart, Heyden James Garcia Hanish age 2, of Roosevelt left this world too soon and before his time on May 6, 2021.
He was born February 22, 2019 to Anthony Hanish and Brandy Garcia.
He was strong willed, defiant and  stubborn, yet always a goofy and giggly child who defied all odds throughout his life.  When he was 10 months old he had an accident, was without a heartbeat for nearly an hour and then had a heart attack. Miraculously, he was brought back.  The doctors only gave him 12 hours to live.  Time after time, with grim diagnosis, he defied everything and was able to live another year and a half.  He was placed on a ventilator and g-tube feeding machine. Through love, support and drive to never give up, as well as hope from his family he strived on.
He had lots of pain physically, emotionally, and mentally in his final months  away from home; he still managed to show improvement.  He had great strength, a will to live, was very brave and had great patience.
He was always a very smart boy who loved his mom, dad and his two older siblings very much. He enjoyed watching Pancake Manor, listening to his mom sing Falling by Steven Lee, as well as Three Little Pigs by Green Jelly and the jaws the game at bedtime.
He brought so much happiness and joy to all around him.  One of the biggest things that will be missed is this big beautiful laugh and his warm hugs.
He is survived in death by his mother, Brandy Garcia (Olsen) father, Anthony Hanish, siblings, Kaleb Hanish, Sven Olsen, grandmother, Sheila Pearson, godfather, Vic  Guerro, and his dog named General.
He is preceded in death by his grandparents, Martin and Guadalupe Garcia, James Hanish, and his great grandparents, Ethel and Richard Hanish.
The family had a private service and then he will be cremated.

To order memorial trees or send flowers to the family in memory of Heyden James Garcia Hanish, please visit our flower store.