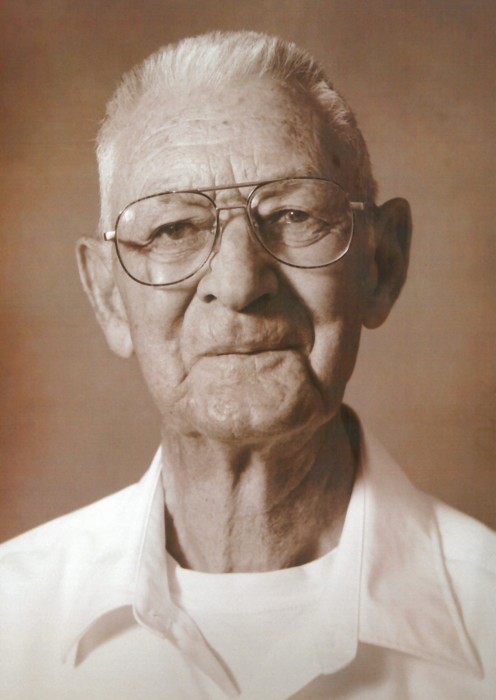 Our amazing father, Glendon James Rhoades, age 97, of Roosevelt, passed away on Sunday, February 18, 2018 at the University Of Utah Hospital Salt Lake City, the result of a fall at his home.
He was born on June 13, 1920 in Hayden, Utah, to Florence Evelyn Duncan and James Thomas Rhoades.  When he was two, his family moved to Neola, Utah. Glen was adored by his two older sisters Rhea and Velma.  His youth was spent at the foot of the majestic Uinta Mountains where he helped his father ranch and race horses. Glen broke his first horse when he was 12 years old and spent every summer until he was 18 years old, riding and racing horses.  He graduated from Roosevelt High School in 1938 where he excelled in basketball and baseball.  After high school, he played on several teams in the Uintah Basin.  He married LaRae Oberhansly in 1941, and together they had one son, Gary.   They later divorced.
Glen served honorably in World War ll as part of the United States Marine Corp from 1944 to 1946.
In 1953 her married Ruth Lorraine Borg.  Together they had four children, Glenda, Jim, Michael and Shannon.  Glen worked for Hiland Dairy until 1957 after which time he and his family moved to Rangely, Colorado, where he was employed by Chevron Oil.  He transferred with Chevron back to Neola in 1968 and worked there until he retired in 1985.
After retiring, Ruth and he owned and operated a family business for several years.
During the last 10 years of Ruth's life, Glen was her constant caregiver.  As her eyes failed he would read the newspaper to her every day.  When she could no longer easily walk, he took over the cooking and other household duties.  He was always there for her.
He was a great sports enthusiast, who loved talking about sports.  He loved watching the Utah Jazz.  He was gifted with an almost photographic memory and could tell you about any player or team that he had ever watched or read about.  He was an avid reader who could read a novel in just a couple of days and would read the daily newspaper from front to back.
Glen took pride in his yard that he hand watered daily, and was looking forward to doing it again this spring.  He always grew a vegetable garden.
In May of 2015, Glen fell and broke his hip.  He, in the words of Winston Churchill, never gave up nor surrendered and was able to return to his home and lived until his death.
He was blessed with a strong, active and alert mind as well as a strong body, which served him for 97 years.
He had a great love and service for his wife, children, grandchildren and great –grandchildren, and did everything possible to make sure that their lives were better and easier.   He never complained, never asked for help, just quietly went about doing what needed to be done.
Glendon is survived by his son Gary Rhoades, Vernal; daughter, Glenda (Mark ) Stewart, Roosevelt; sons, Jim (Stacy) Rhoades, Roosevelt; Mike (Denise) Rhoades Houghton, Louisiana; Shannon (Suzanne) Rhoades, Falcon, Colorado; former daughter-in-law, Ganeane Morgass; 15 grandchildren and numerous great and great-great grandchildren.
He was preceded in death by his wife, Ruth, who he’d been married to for 61 years; his parents, Jim & Evelyn; his sisters Rhea Wiscomb Anderson, and Velma Burton Gerber, grandson Wade Rhoades, and three great-grandchildren.
Funeral services will be held on Thursday, February 22, 2018, at 12:00 noon, at the Hullinger Mortuary where there will be a viewing from 11:00 -11:45 a.m.
Burial will be in the Roosevelt Memorial Park with Military Honors presented by the Roosevelt American Legion and the Patriot Guard Riders.

To order memorial trees or send flowers to the family in memory of Glendon Rhoades, please visit our flower store.