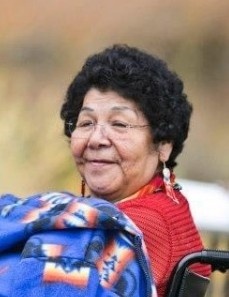 Glenda Alhandra Harris, age 70, of Roosevelt, passed away October 25, 2020, at her home.
She was born July 2, 1950, in Ft. Duchesne, to Lee Alhandra and Lamona Checora.  She married Jackie Lee Harris and they later separated.
Glenda worked most recently as a manager at the Ute Plaza in Ft. Duchesne, but her real skill was as a bartender which she did for several years.  She was also a CNA at the nursing home and hospital in Roosevelt in her younger days.  She was a very giving and caring person who was always there for her children and loved taking care of her grandchildren.  Some of her hobbies included rock hunting, going to the mountains, and visiting with her family and many friends.  She really enjoyed a good cup of coffee.
She was a feisty woman who fought to the very end.  She was very loved and will be greatly missed.
Glenda is survived by her children, Kimberly (Keith) Bussell, Gusher; Terrance Poowegup, Roosevelt; Halona (Roger) Cook, Myton; Carrie Chidester, Roosevelt; Arlene (Joseph) Noble, Roosevelt; Darrell Bekenneth Gardner, II, North Dakota; 27 grandchildren, 34 great-grandchildren; aunts, Pauline Black, Angela (Dale) Shavanaux, Marsha Jack, all of Ft. Duchesne; Jeanette Reed, Myton; and numerous other aunts, uncles, nieces and nephews.
She was preceded in death by her parents; siblings, Floydina Appowora, Leland Alhandra, Manuel Buck, Elizabeth Kent; grandparents, Frank “Chum” Checora, Carrie Yump Mountain, Sam and Mamie Johnson Alhandra, and Margaret A. Jack.
Funeral services will be held at 10:00 a.m., Thursday, October 29, 2020, at her daughter, Kimberly Bussell’s, home.  There will be a wake at the home on Wednesday after 4:00 p.m.
Burial will be in the Ft. Duchesne Cemetery.

To order memorial trees or send flowers to the family in memory of Glenda Harris, please visit our flower store.