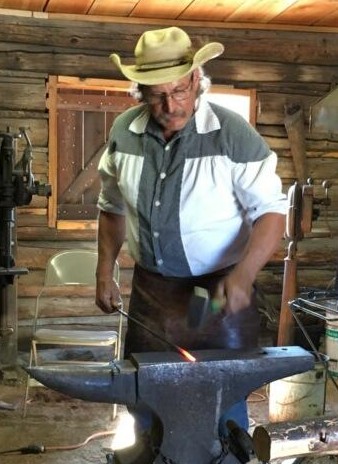 Gerald Pomeroy Cooper, age 58, of Roosevelt, Utah, passed away on March 18, 2019, at The Huntsman Hospital in Salt Lake City, surrounded by his family, after a valiant battle with Leukemia.
He was born December 14, 1960 to Harlin Arvene and Maurice Neilsen Cooper in Vernal, Utah. He was married to Marilyn Mecham in the Provo Temple on October 15, 1982. The search for his career was a defining time in his life, as it followed the oil field bust in the 1980’s, jobs were scarce and sometimes only temporary. He was a carpenter, forest ranger, chimney sweep and cement layer, the experience he gained in these occupations prepared him for the work he would do at the UBATC/UBTECH. He found a place there that was vital to his livelihood, his work was active, creative and always appreciated by his friends and co-workers there. He always jumped at the chance to learn something new. He loved making beautiful things with wood and metal. He was a dedicated member of The Church of Jesus Christ of Latter-day Saints. His favorite callings were teaching in the primary and teaching the scouts survival skills.
Gerald is survived by his wife, Marilyn Mecham Cooper, his children and their spouses Amy Lyn (Brent) Taylor, their children Brooklyn, BreAnn, Max and baby; Katie (Oliver) Burt, their children Mary, Toby, Aryona, Nasha, Cory, Lincoln and Eve; Milton Louis (Kayla) Cooper and their children Byona and Ayriona; Jeri Ann (Dillon) Hillegeist their children Olivia, Calister, Elizah and Walter; Bradly Gerald (Chelesa) Cooper and their children Sofie and Hazel; brothers and sisters-in-laws, Evelyn (Larry) Cooper (Bob) Sheedy, Neldon (Irene) Cooper, Kenneth (MarthAnn) Cooper, Alan (Kathy) Cooper; sisters and brother-in-laws, Daphney “Sami” (Gene) Jensen, Elaine (Eldon) Walton, Irene (Karl) Wayland, Doris (Dwayne) Humphries, Nadine (Randall) Boudrero; mother-in-law, Helen Mecham (Joe) Noble; sister-in-laws, Barbara Spell, Jolyn (Bobby) Richardson, Nancy (Von) Johnson and many nieces, nephews and friends.
He was preceded in death by his parents, Harlin Arvene and Maurice Cooper; father-in-law, Milton James Mecham; his brothers Larry Cooper,  Brent Cooper; his sisters Cynthia Cooper, Marie Harmon; brother-in-laws, George Harmon and Karl Wayland; and granddaughter, Hana Kate Burt.
He will be sorely missed by his family and friends. His family would like to thank the many kind and generous friends who have given spiritual and monetary support throughout this difficult time. Thank You.
Funeral services will be held on Friday, March 22, 2019 at 11:30 a.m. at the Myton Church of Jesus Christ of Latter-day Saints.  A visitation will be held from 10:00 - 11:15 a.m.
Burial in the Leota Cemetery.

To order memorial trees or send flowers to the family in memory of Gerald Pomeroy Cooper, please visit our flower store.