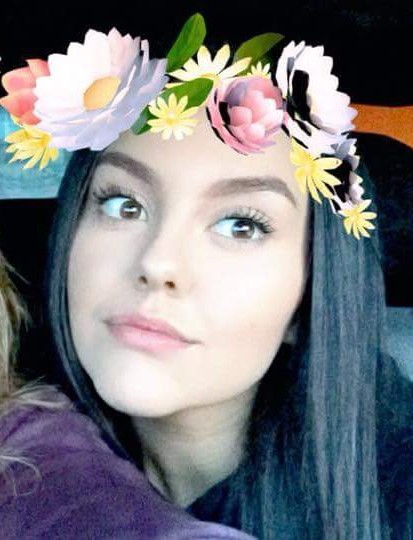 On August 12, 2018, Gabrielle “Gabby” Luperose Manzanares, age 18, of Roosevelt, became an angel to watch over and guide us from above.
She was born January 5, 2000, in Roosevelt, to Clint Manzanares and Sarah Jane Duncan.
Gabby was a kind and gentle soul who very much enjoyed music.  She listened to everything from Bob Marley to Drake and was always dancing and singing along to whatever was playing.  She liked to be in the company of her family and friends exchanging in interesting conversation. The universe was her favorite topic. She adored the night sky and everything in it.  She was full of curiosity and appreciation for nature, and was often out exploring in the mountains, the lakes or even just the front yard.
She was admired for her logical and creative thinking.  She was skilled at problem solving and always had a solution for any difficulty the people close to her were having.  She was very passionate and expressive about her thoughts and feelings, and wasn’t afraid to voice her opinion to those around her.
Gabby was a loyal friend, a loving daughter, and an awesome big sister.  We will remember her voice, her jokes, her hugs, and all of the fun moments we had with this beautiful girl.
Gabby is survived by her parents, Clint Manzanares (Iliana Llamas), Roosevelt; Sarah Duncan, Whiterocks; brothers and sisters, Cliftene Duncan, Eve Manzanares, Xander Llamas, Rubi Manzanares, all of Roosevelt; grandparents, Ronnie Manzanares, Grand Junction, Colorado; Kayleen Gonzales, Salt Lake City; and Dawn Duncan, Whiterocks. She was preceded in death by grandparents, Clifford Duncan, and Lupe LaRose Duncan.
Funeral services will be held on Monday, September 3, 2018, at 12:00 noon at the Holy Spirit Episcopal Church in Randlett.  There will be a visitation on Sunday from 5-7 p.m. at the Hullinger Mortuary.
Burial will be in the Ouray-Tabbee Cemetery.

To order memorial trees or send flowers to the family in memory of Gabrielle Luperose Manzanares, please visit our flower store.