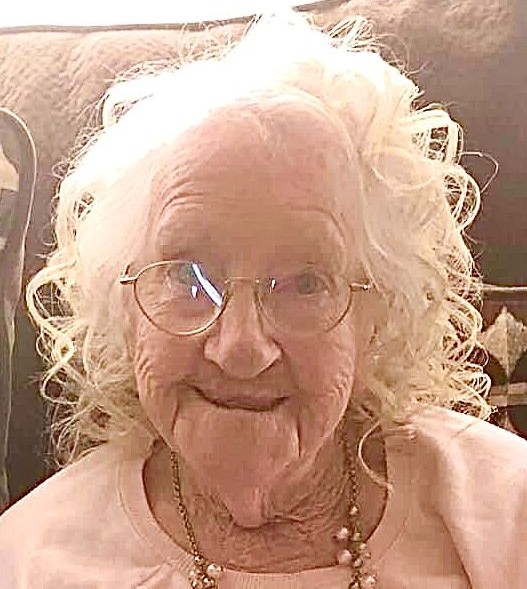 Watch the live-stream of the funeral here.

Evelyn Louise Loranger, age 98, of Cedarview, peacefully passed away at the home of her great-grandchildren, Kenneth and Atissa, surrounded by love.
She was born March 20, 1923, in Weiser, Idaho, to John Clarence and Beatrice Olive Williams Crow, the fourth of eight children. When she was four years old, her family moved to Utah in the back of a horse drawn wagon. She loved her up-bringing and talked about it with such pride. She always said she had the best parents, that they were the kindest people she had ever known, never saying a cross word to one another or their children, and how they filled their little house with so much love.
She married the love of her life, Louis Edward Loranger, in Salt Lake City, Utah on September 18, 1945. Shortly after, they bought a farm and made it into an unforgettable homestead where they had two children Barbara and Edward whom she devoted her life to. She loved her home and lived there with her husband Louis for almost 50 years. She was by his side until the day he passed away after a courageous battle with cancer on January 7, 1996. She remained in her home, being the very strong, loving, independent women she was, until January 2019 when, after a short hospital stay, she moved in with her grandchildren.
Evelyn, above all, loved being a grandmother and by far was the most patient, kind, caring, loving grandmother to all of her grandchildren and many others that adopted her along the way. She was an amazing homemaker and really was the kind of person who would do anything for anyone. She loved with her whole heart, was one-of-a-kind, selfless to a fault, never complained no matter what, and was grateful for everything and everyone God put in her life.
She was an extremely hard worker, and together with her husband, ran their 40 acre farm on which they had cattle, pigs, chickens, a huge garden, and, at times, horses – three of her favorites being “Stormy,” “Jane,” and “Hoss.” She loved taking care of her garden, flowers, house plants and trees, and, when it was time to harvest, she could run a tractor and bail hay, as well as cook a feast for all who came to help – doing it with a smile that could brighten the darkest of days. She canned all the fruits and vegetables they grew and could cook or bake anything you could imagine. At Christmastime, she would get everyone together to make a smorgasbord of chocolates and candies, a memory her grandchildren remember fondly. She was a talented quilter and her stitching was far better than that of a machine. Each quilt was made with the love and care only she could put into it, and with a tag carefully stitched on the back that said, “Made with love!” She was also passionate about walking and would do five miles each morning and evening up until her early 90’s. No one could keep up with her, and even some of the truckers would joke and say how she passed them on the road when they were driving out that way! She had a heart of gold. Everyone will always remember the farm and the wonderful memories made there, and the love that she brought into everyone’s lives!
When her son was thirty-four, he battled brain cancer, and Evelyn was by his side, with his wife, Susie, until he passed. After that, she spent many summers in Denver with his family, usually taking one of her great-grandkids with her on the Grey Hound Bus. She had a way of making everything fun and an adventure. She made sure there was never a dull moment and you always felt loved! Not many years after that, she was by her daughter’s side as she battled breast cancer and beat it! Once she loved you she always would! After Barbara and Frank C. “Butch” Hardinger divorced, she still remained in contact with him and always considered him family.
Evelyn was a devout Christian, and became a member of the Roosevelt Baptist Church, baptized on September 15, 1963. She found a church family in all of the wonderful members. For many years, she was their bookkeeper, and kept track of all the church’s records. She attended almost every Sunday until she wasn’t able to anymore.
She is truly and deeply loved and will be missed by all the many people who held her dear to their heart. She asked that when she went, for everyone to be happy for her and take great comfort knowing she is where she wants to be. She is in her forever Home with Jesus and all those who went before.

Evelyn was preceded in death by her parents; husband, Louis; children, Barbara Hardinger and Edward Loranger; siblings, Charles Crow, Lloyd Crow, Catherine Brown, Grace Eskelson, Raymond Crow, Cleo Crow, Fred Crow.
Funeral services will be held on Thursday, December 23, 2021, at 11:00 a.m. at the Roosevelt Baptist Church. There will be a viewing on Wednesday from 6-8 p.m. at the Hullinger Mortuary and at the church on Thursday from 10-10:45 a.m.
Burial will be in the Cedarview Cemetery.

To order memorial trees or send flowers to the family in memory of Evelyn Loranger, please visit our flower store.