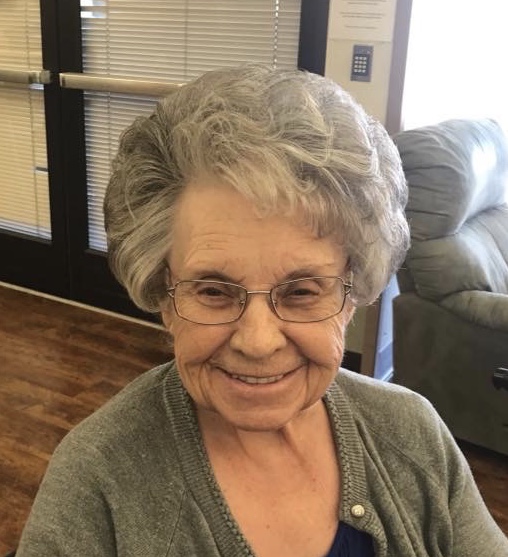 EulaVon Mecham Larsen, age 87, passed away on October 24, 2019 at the Uintah Care Center in Vernal, UT  surrounded by her family. Our family is thankful for her example of endurance and selflessness, and happy that she is finally free from pain and back at her Heavenly home.
EulaVon was born on January 6, 1932 in Roosevelt, Utah to Marvin Cecil and Annie Emmiline Shepherd Mecham. She remained a lifelong resident of the Basin.
She married Edwin Jay Larsen August 10, 1948.  Together they had five children and later divorced.  She married Robert Kirk Bostick in June 1974, and they later divorced.
Mom loved her family and was a dedicated wife and mother.  She taught her children the value of hard work.  She always made sure our Christmases and birthdays were full of family traditions and she took great pride in making those times magical.  As adults we looked forward to the six loaves of homemade bread and jam she would bring to us with her signature, “Yoo-Hoo” as she walked through the door.  She adored her grandchildren and they all lovingly called her “Granny Ha-Ha!”  Mom made sure every child, and grandchild received one of her beautiful crocheted afgans.  She  liked to play cards and REALLY liked to win! She looked forward to her weekly bridge club and spending time with her friends.  One of her favorite activities was dancing at the singles ward every Friday night.
Mom was a hard worker and operated several businesses alongside her husbands.  They include Jays Ice Cream, Bowl-a-Rama, Diamond Music Co. and Boss Mudd Drilling Fluids, Inc.  She also worked on the family farm branding cows, bailing and hauling hay, cooking/canning and creating living a self-reliant life.  She sold Avon for over 35 years and earned many Regional and National Sales awards, including several trips.
She was an active member of the Church of Jesus Christ of Latter day Saints.  She was happy to be among the first of the ordinance workers, when the Vernal Temple opened.  She served in the Temple more than 10 years until her health declined.
EulaVon is survived by her brothers, Cecil "Sonny" (Arlene) Mecham, Gary (Ludawn) Mecham, Ronald (Ruth) Mecham; children,: Mark Larsen, Amy (Dannie) Daniels, Cindy (Jack) Jensen, Ryan (Tari) Larsen, Wendy (Troy) May; stepchildren,  Tammie Bostick-Cooper, Kellie Bostick-Russell; 20 grandchildren, 41 Great grandchildren, 7 great-great grandchildren, and many nieces, nephews, cousins and friends, all of whom she loved dearly.
She was preceded in death by her parents; her husbands; a sister, Reah Dorothy Mecham Pace; a grandson, Pete Troy May; son-in-law, Terry Don Bostick, daughter-in-law, Marilyn Russell Larsen.
We would like to extend a special thank you to the Parkside Manor and the Uintah Care Center for the incredible care mom received the last four years.
We love you mom, and we will miss you dearly!
Funeral services will be held on Monday, October 28, 2019 at the Roosevelt 11th Ward Chapel, 250 W 200 N, at 11:00 a.m. with a viewing an hour prior to the services. Also a viewing Sunday evening at the Hullinger Mortuary from 6:00- 8:00 p.m.
Burial will be in the Roosevelt Memorial Park

To order memorial trees or send flowers to the family in memory of EulaVon Larsen, please visit our flower store.