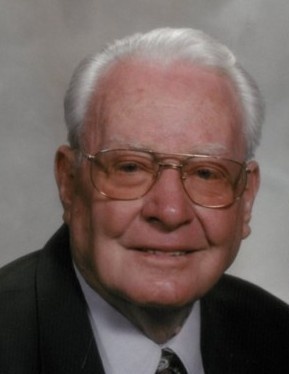 Erwin Rust, age 95, of Altamont, passed away February 25, 2020, peacefully at the Senior Villa in Roosevelt surrounded by his family.
Erwin was born May 7, 1924, in Mt. Emmons, Utah to LeRoy W. and Clara Bracken Rust. Erwin was drafted into active service of the US Army in July 1943 at the age of 19. After his initial military training, he volunteered to train as a pilot and was transferred to Logan, UT, in the Air Corp for this training. However due to a lack of infantry personnel he was transferred back to the 71st Infantry Division where he was trained and served as a machine gunner in the Army. In 1945, he was sent to England where he was sent by boat to France and then on into Germany. It was while he was on the front line in Germany 1945 that he developed appendicitis. He had surgery at 2 am in a field tent to remove his appendix. It was determined by the field doctor that his appendix was acute gangrenous and he likely would not have survived another day if it had not been removed when it was. His surgery ended his combat days and he returned back to France to recuperate since the war ended in May, 1945. Erwin was honorably discharged from the Army on May 6, 1946.
Erwin married Dorthy Hansen on December 23, 1951 in Ely, Nevada. Erwin's career as Superintendent of Wiscombe Southern Painting Company, painting locks and dams, led them on adventures to many states including Utah, Oregon, North Dakota, Wyoming, Alabama, Florida, Arkansas, Kentucky then returning back to Altamont, UT for the last 47 years. Here he continued working in the oilfield until he retired. Together they welcomed seven children into their lives (three sons and four daughters.)
They were sealed September 3, 1993 in the Jordan River Temple. Erwin was an active member of the Church of Jesus Christ of Latter-Day Saints where he served faithfully in many callings. He also served many years as an ordinance worker in the Vernal Temple.
Erwin had many interests including the deer camp/hunt (getting his last deer in the Book Cliffs in 2013 at the age of 89), gathering firewood, dancing in his younger days, playing cards, attending horse races and watching his children and grandchildren's sporting events.
Erwin was able to go with his daughters, Diane and Janet to Moscow, Russia in 2005 to visit Kent and Janet who were living there at the time for Kent's work. While there they attended the Victory Day Celebration which commemorated the 60th anniversary of the end of WWII. Erwin had a memorable trip to Russia and while there celebrated his 81st birthday.
One of Erwin's highlights was joining with other WWII Veterans on the Honor Flight May 7-9, 2015, with his son Kent to Washington D.C. This was especially rewarding to him as it was his 91st birthday and he was able to see many of the sites in the Washington DC area which honored the men and women of WWII. Of particular interest to him was the visit to the Arlington Cemetery and the Tomb of the Unknown Soldier.
He is survived by children, Kent (Janet) Rust, Cedar Hills; son-in-law, Bob Litton, Vernal; Cindy (Rick) Reynolds, Vernal; Diane (Kim) Lindsay, Mountain Home; Janet (Brad) Mecham, Neola; Mike (Ginger) Rust, Roosevelt; David (Jaime) Rust, Altamont; 23 grandchildren, 37 great grandchildren with 3 more on the way.
He was preceded in death by his loving wife of 66 years, Dorthy, his parents, LeRoy and Clara Rust; parents-in-law, Waldo and Loa Hansen; daughter Susan Litton; granddaughter, Jill Litton Ballamis; grandson-in-law, Kade Bell; great-grandson, Boston Behling; siblings, infant sister, Clara Rust, Zella (Evan) Bennion, Mable (Harold) Jones, Lavon (Henry) Chapman, Fern (Cloyd) Powell, Guy Rust, Anthon (Ona) Rust.
Funeral services will be held Saturday, February 29, 2020, at 12:00 noon at the Altamont Stake Center of the Church of Jesus Christ of Latter-day Saints.  There will be a viewing at the church prior to the services from 10-11:45 a.m.
Burial will be in the Altamont Cemetery with military honors presented by the Altamont American Legion, the Patriot Guard Riders and the Utah National Honor Guard.
Erwin's family would like to thank Hospice Services, the Senior Villa and many others for their loving care of dad during these last several months.

To order memorial trees or send flowers to the family in memory of Erwin Rust, please visit our flower store.