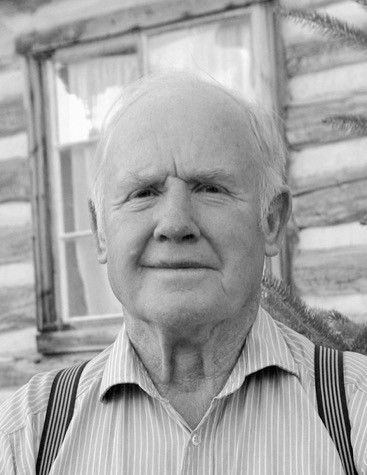 Ervin David Young, age 86, of Lapoint, died Tuesday night, March 6, 2018, at his home from complications of cancer.
He was born November 14, 1931, in Randlett, to Jonathan “Jack” David Young and Mary Ann Peterson Nilsen.  He was the youngest of 10 children.  He graduated from Alterra High School and attended Utah State University in Logan.  While in high school, he met and fell in love with Marion Irene Rasmussen.  They were married and sealed for eternity in the Salt Lake LDS Temple on January 16, 1952.  He was devoted to her throughout her life until she died on April 15, 2017.
Ervin was a professional painter in California and the Uintah Basin for many years before working at his true love, ranching and farming for the rest of his life.  He was a true pioneer and loved to take undeveloped land and create a working ranch from it, which he did in Lapoint, the Book Cliffs, and Mosby mountain.  Whatever he did and wherever he lived, his sweetheart was hand in hand with him, and when she became ill in the later years of her life, he devoted all his efforts to caring for her.  He loved the ranching life, but he loved Marion more than anything else.
Ervin is survived by his children, Kenneth (Kim) Young, Brent (Karin) Young, Kevin (Jan) Young, Jan (Kay) Burr, LouAnn (Dale) Brough, Kyle (Shauna) Young, Kelly (Jeri) Young, Mary Jo (Kenny) Warren, 45 grandchildren, 56 great grandchildren; two sisters, Gladys Jarman and Donna Seymour.
He was preceded in death by hhis parents, Jack & Mary; 2 brothers Bert & Bill Young, 4 sisters, Reva Daniels, Madge Sauer, Bernice Glenn, Claris Broome, Doris Colton;  and two grandchildren, Conner Young & Arianna Belle Gill.
Funeral services will be held on Monday, March 12, 2018, at 11:00 a.m. at the LaPoint LDS Chapel.  There will be a viewing on Sunday from 5-7 p.m. at the Hullinger Mortuary and from 10-10:45 a.m. Monday at the church.
Burial will be in the Lapoint Cemetery.  Condolences may be shared at www.hullingermortuary.com

To order memorial trees or send flowers to the family in memory of Ervin David Young, please visit our flower store.