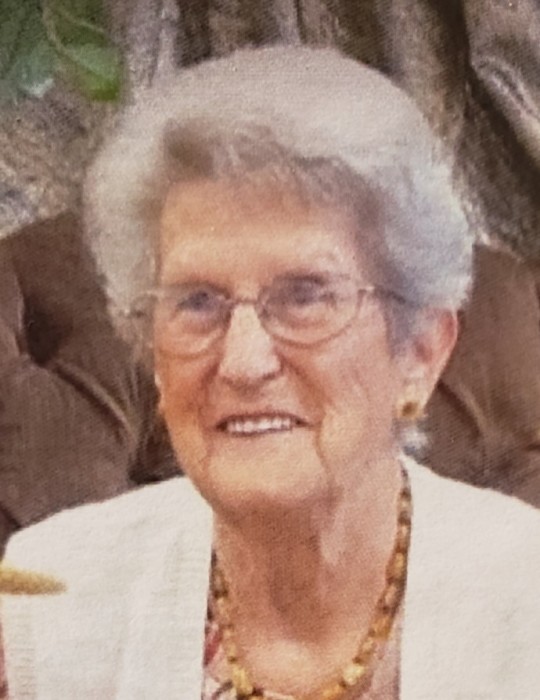 Afton Eileen Cluff Rasmussen Merkley, age 92, of Duchesne, passed away January 12, 2020, at the Uintah Basin Sr. Villa.
She was born May 14, 1927, in Duchesne, to Benjamin Christopher and Cleona Levet Wheeler Cluff.
When she was very young, her mother passed away and then she was raised by her grandparents John and Minnie Wheeler.
Eileen married Wells D. Rasmussen in February 5, 1946 and was blessed with three sons, Larry, Blake, and Lynn Rasmussen.   He died December 9, 1977.  She married Roland Richard Merkley on June 6, 1981, in Reno, Nevada.  He died September 16, 2006.
Eileen and Wells raised their children in Arcadia while he was the foreman for the Myrin Ranch.  They then ran the Wells Club for several years and she worked for Kohl’s in Duchesne.  She had also been a camp chef, but primarily she was a homemaker.  She enjoyed camping, fishing, going on picnics, adding to her rock garden, flowers, and butterflies.  She really liked to play Bingo at the Duchesne Senior Center.  She was a talented oil painter and spent many winters “snowbirding” in her camper.  She loved spending time with her children and grandchildren.  She was well loved and will be deeply missed.
Eileen is survived by her children, Larry (Carol) Rasmussen, Duchesne; Lynn (Maxie) Rasmussen, Roosevelt; daughter-in-law, Vickie Rasmussen, Roosevelt; 9 grandchildren, 25 great-grandchildren, 2 great-great-grandchildren; a sister, Donna Powers, Colorado; and numerous nieces and nephews.
She was preceded in death by her husbands, a son, Blake; her parents; sisters, Reta Seiken, Loa Bond, Leah Mecham; brothers, Raymond Cluff, Don Cluff, & Phillip Roberts; and grandson-in-law, Tyson Boren.
The family would like to thank Parkside Manor and the Sr. Villa for their loving care of Eileen.
Funeral services will be held on Friday, January 17, 2020, at 11:00 a.m. at the Duchesne 1st and 3rd Ward Chapel of the Church of Jesus Christ of Latter-day Saints where a viewing will be from 10-10:45 a.m.
Burial will be in the Strawberry Cemetery.  Condolences may be shared at www.hullingermortuary.com

To order memorial trees or send flowers to the family in memory of Eileen Rasmussen Merkley, please visit our flower store.