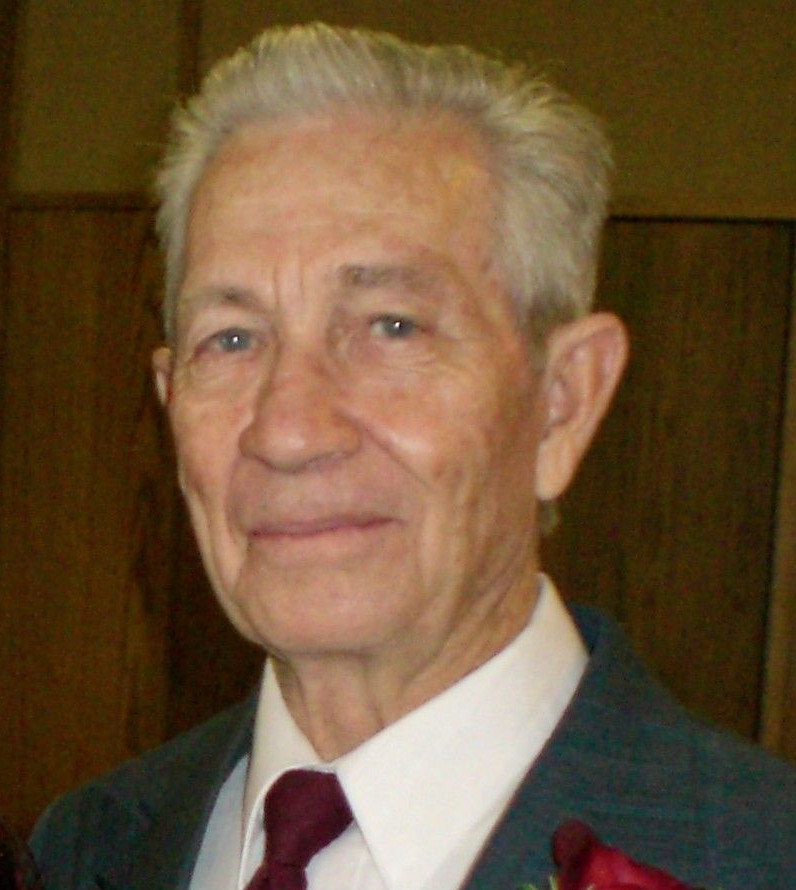 For those unable to attend the funeral service in person, it will be live-streamed HERE

Edwin Garold Richman returned peacefully to our Heavenly Father on July 19, 2021, in Washington, Utah, at the age of 92. He was a kind and gentle man whose patience and dedication to his family and to the Lord will forever be an example to us all.
Edwin Garold Richman was born September 28, 1928, in a log cabin in Neola, Utah, the fourth son of Elmer John and Florence Morilla Woodward Richman. He moved with the family to Roosevelt at age 5, attended school there, and graduated in May 1947
On December 28, 1946, while a senior in high school, Ed joined the US Army. He served most of his enlistment at Letterman General Hospital headquarters where he served as the chauffeur for the commanding officer to The Presidio in San Francisco. Ed was also in charge of the message center and worked at the Officer’s Club waiting and bussing tables for $1 per hour to earn extra money. He was always a hard worker with a sense of adventure. He earned the rank of Buck Sargent and was honorably discharged on June 17, 1948
Ed was very proud to be an American soldier and always proud to be an American. He got up early every morning through most of his life to raise an American flag at his home. He was thankful to enjoy the freedoms we all have in this great United States.
Ed returned to Roosevelt and married Juanita Afton Gleaton on September 30, 1948. They were married 7 years, during which time Karen, Garold and David were born, then divorced. On December 2, 1956, Ed married Betty Lillian Bigelow. Betty had two sons, Craig and Wayne “Rick”. Val and Max were born shortly after. Ed and Betty raised 7 children. He never moved from Roosevelt and expressed that he had seen many changes large and small.
Ed loved the outdoors and spent many happy hours at his cabin in Whiterocks Canyon. He loved hunting, fishing, and enjoying nature and he was a horseshoe champion many times over.
Ed worked at Ashton’s grocery store for 7 years, then delivered gas and oil for a year before managing the Phillips 66 bulk plant until 1960, at which time he purchased the business and changed the name to Richman Oil. He ran the company until 1984 then retired at the age of 56
Ed served as an active member of the Roosevelt Volunteer Fire Department for 43 years from 1950-1993. He served in the Provo Temple for the Church of Jesus Christ of Latter Day Saints for 4 years and then served in the Vernal Temple for 14 years .
Betty died in an automobile accident on December 31, 2003. They were married for 47 years. Ed married WaNeta Bjorn Lamb on December 16, 2006. They enjoyed spending their summers in Roosevelt and their winters in Washington, Utah. They loved traveling and sharing their life together. They were married for 14 happy years.
Ed is survived by his wife, WaNeta Lamb Richman, his daughter, Karen (Barry) Bishop, and his sons, Garold (Linda) Richman, Wayne “Rick” Richman, Val (Sue)Richman, and Max Richman, as well as many grandchildren, great grandchildren, and great-great grandchildren. He is also survived by his sister, Melba (Jay) Turner, and his brother Lamar (Sandy) Richman.
The family wishes to thank the staff at the Beehive Homes and Applegate Hospice for their loving and compassionate care.
Funeral services will be held at 1:00 pm on Saturday, August 7, 2021, at the Roosevelt 2nd Ward Chapel, Church of Jesus Christ of Latter Day Saints, located at 250 West 200 North in Roosevelt, Utah.
Family and friends may gather at 11:30-12:30 for a visitation prior to services.
Interment will follow at the Roosevelt Memorial Park with military honors presented.

To order memorial trees or send flowers to the family in memory of Edwin G. Richman, please visit our flower store.