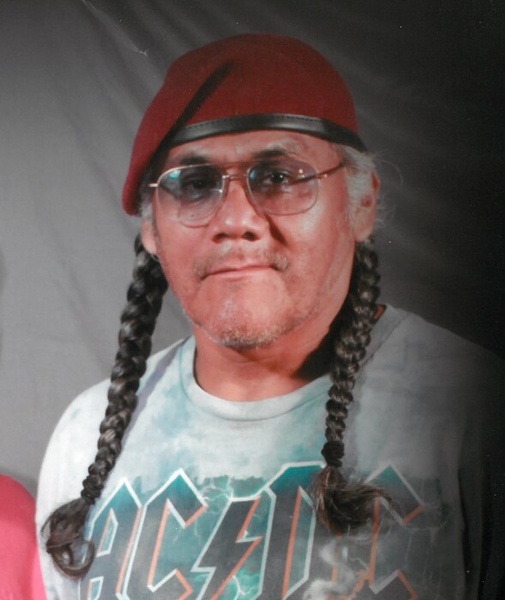 Eddie Charles Perank, age 59, of Myton, passed away March 7, 2021, after a short battle with cancer.
He was born July 24, 1961, in Roosevelt, to Amos Perank and Nettie Myore Perank. He was with Bettina Wissiup for almost 20 years and finally made it official on March 5, 2021.
Eddie served in the US Army during the Cold War in the early 80's.  He worked many different places as a truck driver or heavy equipment operator.  He enjoyed watching war and Army movies, hunting, and harassing the grandkids.  He helped raise five of his grandchildren.  He was a Sundancer and would dance at Pow Wows.
Eddie is survived by his wife, Bettina, of Myton; a daughter, Jamie Wissiup, 14 grandchildren, 2 great-grandchildren; siblings, Eldora Perank, Myton; JoAnn Perank, Jolene (Ferron) Wyasket, both of Arcadia; Clara Perank, Vernal; Justine Perank, Myton; Amos (Myla) McCurdy, Whiterocks; and numerous nieces and nephews.
He was preceded in death by his parents, siblings, Eugene Perank, Teresa Shulte, Amy Perank; a granddaughter, Imogene Wissiup; and a nephew, Jacob Perank.
Graveside services will be held on Thursday, March 11, 2021, at the Randlett Cemetery.  There will be a wake at Chandria Wissiup’s home, 245 W 200 N, Myton, on Wednesday after 4:00 p.m.  Luncheon will follow the burial and it will be held at the Ballard Best Western Conference Room.

To order memorial trees or send flowers to the family in memory of Eddie Charles Perank, please visit our flower store.