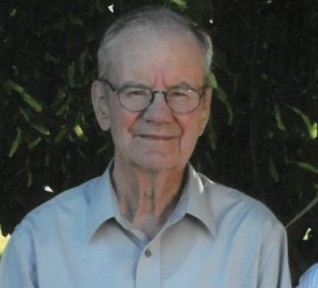 Dennis Charles Eschler, age 91, of Roosevelt, passed away April 28, 2019 at the Uintah Basin Medical Center.
He was born September 18, 1927 in Montpelier, Idaho to Alma Lehi and Viola Carrie Teuscher Eschler.
Dennis married Lillian Gerber in the Logan Temple, they were married for 70 wonderful years. Their life together was a beautiful love story. For the past several years Denny could be found taking care of his sweetheart. She passed away July 8 , 2018 making his life so very lonely and now they are together again.
Dennis was an active member of the Church of Jesus Christ of Latter Day Saints, and had a love for the Savior Jesus Christ. He was often found doing good and serving others. Dennis was always a positive person, and when he was ask how are you doing he would say, “If I was doing any better I couldn’t stand it” He was a devoted Dad to his two sons and would always find time to take them hunting, camping and was there for them when they needed to talk. He loved his grandchildren and loved to tease them; for example he would ask them if they wanted a drink and when they said yes he would give them two or three drops, that would always make the kids smile. The grandkids loved to go to their grandparents house where they would play games, fish in the gutter, go to the park or sometimes even go on special vacations with their grandpa and grandma.
Dennis was raised on a farm in the small community of Raymond Idaho. He graduated from Cookeville High School, where he loved playing basketball and other sports. After he married Lily he worked on his small farm for several years and then he moved his family to Logan. While in Logan he worked for Pacific Fruit, and then went to work for Walton Feed Company. His favorite part of the feed company was when he could drive the 18 wheeler delivering feed. Sometimes he would deliver to Myron and the grandkids loved when Grandpa would take them for a ride in the truck. After his retirement they moved to Roosevelt to be close to Roger and family. He worked part time at Rowley’s Nursery which he really enjoyed. Dennis loved to work in his yard, which was always beautiful. They would put up decorative light for all the holidays which the neighbors loved. He also was an avid reader.
He is survived by his son Roger (Norene) Eschler, Roosevelt: Grandchildren Edwin (Angela) Eschler, Roy; Rachelle (Stephen) Cook, Sidney (Leah) Eschler, Drew (Stacy) Eschler, Quentin (Megan) Eschler, all of Roosevelt; Milton (Katie) Eschler, Yukon Ok; 20 great grandchildren.
He was preceded in death by his wife Lillian Gerber, son Marvin Eschler. His parents Alma and Viola Eschler and his older brothers Melvin, Dean, and Norman.
Funeral services will be held on Friday, April 26, 2019 at 11:00 a.m. at the Hullinger Mortuary.  A viewing will be held that morning form 10:00 - 10:45 a.m.
Burial in the Roosevelt Memorial Park.
Condolences may be shared at www.hullingermortuary.com

To order memorial trees or send flowers to the family in memory of Dennis Eschler, please visit our flower store.