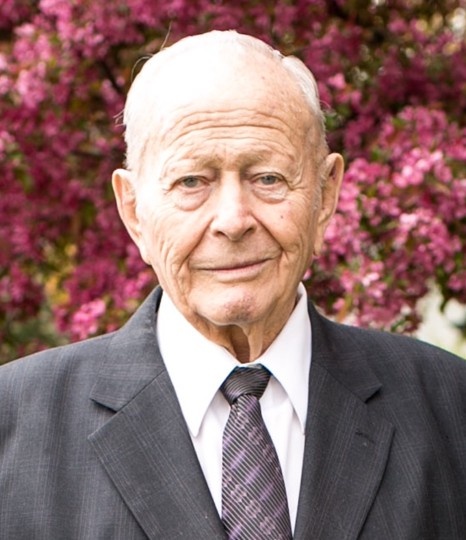 Everett Dee Roberts, age 85, of Altamont, passed away on August 31, 2018, surrounded in love with his family by his side.
Dee was born on July 24, 1933, in Roosevelt, Utah, to Ray & Thelma Harrison Roberts.   He married the love of his life Minnie Lue Jessen Stevenson on August 22, 1958, in Las Vegas, Nevada. At that time he gained a beautiful daughter Maxie B Stevenson. They later welcomed a sweet second daughter, Diana Lee.  Minnie Lue and Dee’s marriage was solemnized in the Salt Lake Temple in 1971.  She died February 27, 2011.
Dee lived a life of service. At the tender age of 17, he joined the Navy during the Korean Conflict. He loved his country and found it an honor to serve. Dee was honorably discharged in 1955.
Throughout his lifetime Dee mastered many trades.  The first of which was as a body and fender man for Capitol Chevrolet.  After raising their family in the city for a few years, Dee and Minnnie Lue had a desire to move back home to Altamont. When an opportunity arose for them to purchase Mohlman's Store that desire became a reality.  In order to enhance the opportunity to make the store successful, Dee also enrolled and finished Barber School.  Dee was never afraid of hard work and along with owning the store he had a side trucking business in which he hauled in some of his own freight.  After he and Minnie Lue sold the store trucking became his full time profession.  Throughout the 27 years that they owned and operated Mohlmans, Dee was not only successful in business, he made many friends because of his generosity, kindness, and his continued service within his community.  Dee was a volunteer fire fighter and EMT and was instrumental in getting a new fire engine, and ambulance service to the upper country. Dee was a devoted member of Church of Jesus Christ of Latter-day Saints, and held many callings including Elders Quorum President, High Councilor, Bishop, Stake President, Stake Patriarch, and Temple worker –  no matter the calling, he fulfilled each one with a servant's heart.  He and his sweetheart were called to serve in the Durban, South Africa Mission. They were humbled during this time and deeply cherished the opportunity to serve the Lord.  They loved the people of Africa with all their heart.
Dee is survived by his daughters, Maxie (Lynn) Rasmussen, Roosevelt; Diana (Steve) Hamilton, Evanston; a sister, Karolynn (Arlin) Freeman, Herriman; 7 grandchildren, 23 great-grandchildren; and numerous nieces and nephews.
He was preceded in death by his wife; his parents; a brother, Val, and sister, Tammy McDermaid.
Funeral services will be held on Wednesday, September 5, 2018, at 11:00 a.m., at the Altamont Stake Center of the Church of Jesus Christ of Latter-day Saints.  There will be a viewing at the church on Tuesday from 6-8 p.m. and on Wednesday from 9:30-10:45 a.m.
Burial will be in the Mountain Home- Boneta Cemetery with Military Honors by the Altamont American Legion and the US Navy Honor Guard.

To order memorial trees or send flowers to the family in memory of Dee Roberts, please visit our flower store.