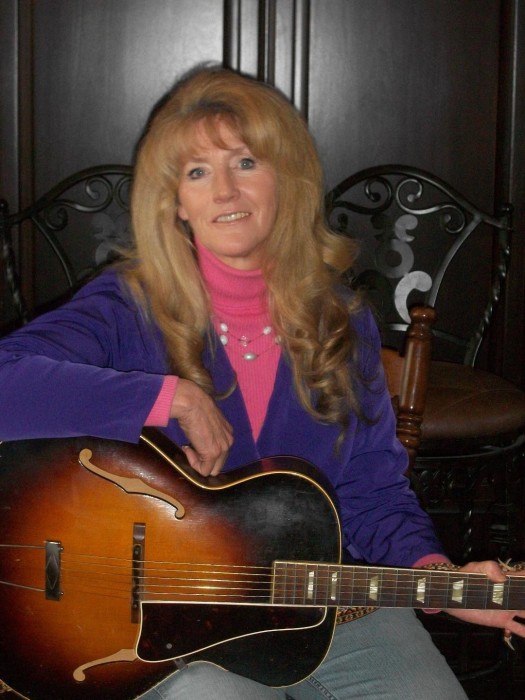 Debbie Idell Reynolds Jarman, age 65, of Ouray Valley, passed away March 5, 2019, at her home, surrounded by her family, after a battle with cancer.
She was born February 12, 1954, in Sacramento, California, to Frank Lamar and Bernetta Bell Baker Reynolds.  She married Garth Ward Jarman on October 18, 1974.  They were later sealed in the Provo Temple of the Church of Jesus Christ of Latter-day Saints on October 27, 1988.  He died on September 7, 1998.
Debbie’s greatest love, apart from her family, was music.  She sang and played the guitar with her father and sister, Dale, in a band called “Lamar and Company.”  They played countless times in the local senior centers and sang at many funerals and other functions.  She also was an accomplished artist in painting and woodworking and sold many of her works.  She was a devout member of the Church of Jesus Christ of Latter-day Saints and held the callings of Relief Society President, Young Women’s President, a teacher in the primary and most recently a teacher to the youth in Sunday School – a calling that was very important to her.  Her hobbies included baking – her cinnamon rolls were famous – and gardening flowers and vegetables, which she would share with everyone!
She was a wonderful mother and grandmother and she and her siblings were very close.  They enjoyed many trips together.
Debbie is survived by her children, Garth Ward (Tracy) Jarman, Jr., Washington, UT; Amber Idell Jarman, Gill Franklin Jarman, and Caleb Lance Jarman, all of Randlett; grandchildren Brinlee, Oaklee, Leyton, Salem, and Krew; her mother, Bernetta Reynolds, Vernal; brother, Lonnie Hancock (Leslie Anderson), California; sister, Dale (Mike) Maguire, Vernal; brothers- and sisters-in-law, Marsha (Bryce) Moore, Roosevelt; Bruce (Sandy) Jarman, Randlett; Joan (Scott) Sheffer, Vernal; mother-in-law, Gladys Jarman, Vernal; and several nieces, nephews, and special friends.
She was preceded in death by her husband, Garth; an infant grandson, Garth Ward Jarman, III; and father, Frank.
Funeral services will be held on Friday, March 8, 2019, at 11:00 a.m. at the Randlett Branch Chapel of the Church of Jesus Christ of Latter-day Saints where a visitation will be from 10-10:45 a.m.
Burial will be in the Avalon Cemetery.

To order memorial trees or send flowers to the family in memory of Debbie Idell Jarman, please visit our flower store.