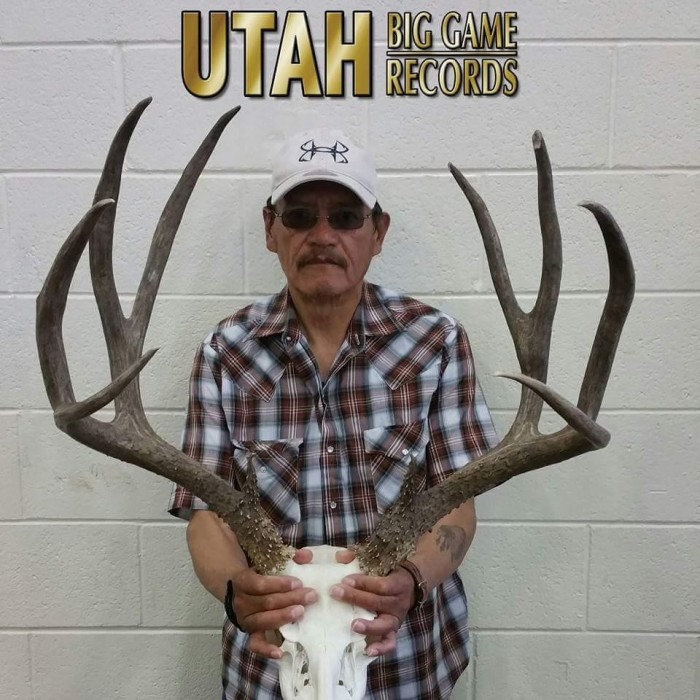 David Wopsock, age 61, of Ft. Duchesne, passed away September 2, 2018, at the Intermountain Medical Center.
He was born August 8, 1957, in Roosevelt, to John and Letha Harris Wopsock.  He married Alecia Cesspooch on July 3, 1986, in Ballard, and they were later divorced.
David attended school at the Sherman Indian High School where he excelled at Basketball, receiving scholarship offers from three colleges.  His expertise was shooting 3-pointers.  He also had a talent for singing and writing his own lyrics.  In his younger days, he was a Sundancer and attended sweats.  .
He worked as a security officer for the Ute Indian Tribe, and was an alcohol and drug counselor, where he was able to help many people overcome their addictions.  He enjoyed being outdoors, hunting, fishing, riding horses, trapping, joy-riding, shed hunting, attending Pow Wows, and gambling.  His favorite thing to do was watch sports, especially basketball. He loved to sing country music. His hobbies included coin collecting, gardening plants and flowers.  He won numerous prizes for his big game trophies.
He had a very giving and willing heart, and would help anyone in need.  He made friends with everyone he met, and was a loving father and grandfather. His main priority was spending time with his family and grandchildren.  He is very much loved and will be missed.
David is survived by his companion of 32 years, Alecia; children, Dalvessa (Jesse) Wopsock, David H Wopsock, Jeff Wopsock, Patrick Wopsock, all of Ft. Duchesne; grandchildren, Amelia & Delecia Wopsock; Caleb Mart; brothers and sisters, Hank (Ingrid) Wopsock, Corina Wopsock, Leslie (Ojay) Trujillo all of Whiterocks; Ron (Cindy) Wopsock, LaPoint; Jennie Murdock; Merla Wopsock, Lana (Leslie) Myore, all of Whiterocks Road; and numerous nieces and nephews.
He was preceded in death by his parents, John & Letha; brothers and sisters, Maureen, Floyd, Roland K, John Jr., Carl Dean, & Gloria Ann Wopsock, and Zina Starr.
Funeral services will be held at the Whiterocks Community Building on Friday, September 7, 2018, at 10:30 a.m.  There will be a wake at his home in Ft. Duchesne on Thursday after 4:00 p.m.
Burial will be in the Ft. Duchesne Cemetery.

To order memorial trees or send flowers to the family in memory of David Wopsock, please visit our flower store.