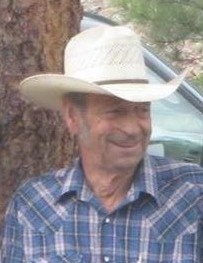 Loving husband, father, grandfather, great grandfather, uncle, brother and friend to all, David S Duncan, Sr., passed through the veil in the arms of his loving wife and surrounded by his family on April 11, 2020.
Born to McNeil and Elva Duncan on April 26, 1943 in Neola Utah.  He married Diane Roberts on June 22, 1962, and they were later sealed for all time and eternity on June 22, 1996 in the Salt Lake Temple.
He graduated from Union High School where he was active in the FFA program and attended two state FFA conventions. He set a track record his junior year in a meet at BYU. He loved his time being a Boy Scout leader teaching the young men his camping and Dutch oven cooking skills at Klondike’s and high lake camps.
David had a love of life and never shied away from work and making sure his family came first. His passion for the outdoors was bigger than life, if he wasn’t fishing in a stream, he was horseback.  A story is told that at two years old, he wandered over to the horse pen, put a twine around the horses neck and climbed up (no one is sure how) and went to visit his dad in the hay pasture. This was the beginning of his love for the horse.  He won many trophies riding in competitions, taking a chariot team to the cutter world championship in Idaho, and many flat saddle race horses. He was always most comfortable atop a horse, whether it be hunting fishing or high lake trips, 4-h club leader, riding with his family, or just to take ride. David was also a bull-rider for many years and he passed this to his sons, grandsons and most recently his great-grandson.
His greatest love was for his wife, you didn’t often see one without the other.  When they were together they always held hands, he always opened the doors for her and made sure she came first.  They were true soul mates. Known as dad, grandpa, pa-pa, -ampa, grandpa great, best friend and hero!
He is the backbone to our family, the thread that binds us all together.  He is the one, the only, and the “Damn I’m good!” and is so missed by all.
David is survived by his wife, Diane of 57 years, his children, Sherry (Dennie) Bird, David (Candy) Duncan, Gary (Stephanie) Duncan, Cindee (Tyler) Scott, 22 grandchildren, 24 great grandchildren, brothers, McNeil (Connie) Duncan Jr, Ralph (Jamie) Duncan, many nieces and nephews who refer to him as their hero.
He was preceded in death by his parents, siblings, Don and Lloyd Duncan, Elaine Jones and special brother-in-law, Carl “Jonsie” Jones  and great granddaughter, Randilyn Winn.
Services will be private at this time. A celebration of life will happen at a later date.  Burial will be in the Neola Cemetery.
Condolences may be shared at www.hullingermortuary.com

To order memorial trees or send flowers to the family in memory of David Duncan, Sr., please visit our flower store.