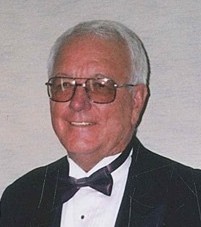 David Lee Arnold, age 81, of Ballard, passed away on February 7, 2018 at the Uintah Basin Sr. Villa.
David was born September 27, 1936 in Gusher to John Kimball and Mary Dean Arnold.
He married Jean Doris Jones, they later divorced.  He married Merrillyn Kay Van Wyck Bergener on September 1, 1990.  She died November 27, 2014.
David worked as a truck driver, mechanic, and dispatcher for 22 years.  He enjoyed driving and fixing up stock cars in his younger days.  He was an avid outdoors man, spending time camping, hunting and fishing.
He is survived by his children, Kimball Arnold, Sue Robinson, Kelly (Wes) Barlow, Lisa (Paul) Salisbury, step children, Ray (Tami) Bergener, Tim (Tammy) Bergener, Mark (JaNece) Bergener, Jeff (Tiffany) Bergener, siblings, Kaydean Morgan, Judy (Jim) Rushton, and numerous grandchildren.
He was preceded in death by his wife Merrillyn, and sister, Rosemary Mortenson.
Funeral services will be held on Saturday, February 17, 2018, at 11:00 a.m. at the Ballard LDS Chapel.  There will be a viewing on Friday from 6-8 p.m. at the Hullinger Mortuary and on Saturday from 10-10:45 a.m. at the church.
Burial will be in the Roosevelt Memorial Park.

To order memorial trees or send flowers to the family in memory of David Arnold, please visit our flower store.