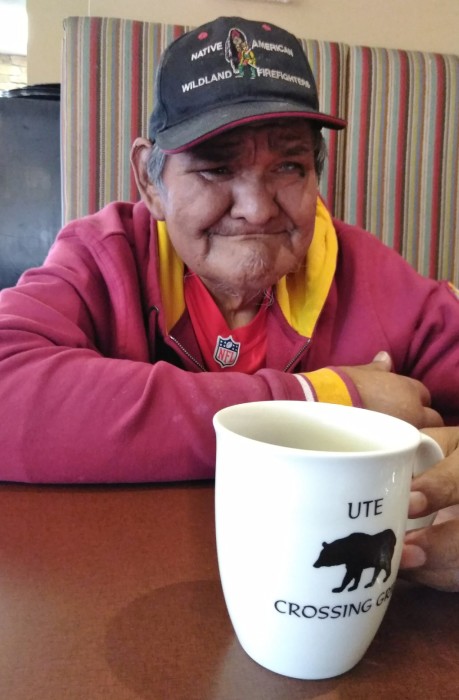 Daryl Lewis “Butch” Powaukee, age 67, of Yellowstone Subdivision, passed away June 14, 2018, at the Utah Valley Hospital.
He was born July 30, 1950, in Lewiston, Idaho, to Richard and Katherine Red Heart Powaukee.  He married Vivian Joy Sireech on March 20, 1970, in Logan.  She died March 22, 2006.
Butch worked most of his life as a wildfire and forest fire fighter in many capacities.  He was a helicopter technician for the Boise region, a crew boss in various places, and worked on fires in California, Texas, Nevada, Idaho, Florida, and Arizona.  He was very close to achieving the rank of a Hot-Shot firefighter.  In his younger days, he was a cook at the Bottle Hollow Resort in Ft. Duchesne.  Butch was an avid sportsmen and played football and baseball for the University of Idaho; he also played with the “Nations” softball team, traveling all over the western United States.  He liked to be in the outdoors, fishing, hunting, and was a traditional dancer at many Pow Wows.  He will be remembered for listening to his oldies music, playing the Tuba, and as a woodcarving artist.  He loved his family, especially his grandchildren, and will be dearly missed.
Butch is survived by his children, Bart (Quanah) Powaukee, Roosevelt; TJ Flores, Lapawai, ID; Pablo Flores, Wendy (Derwin) Kenneth, both of Ft. Duchesne; Carlo (Iris) Chimburas, Lewiston, ID; Patrick Long Soldier, Ft. Duchesne; Laurie Ann Patterson, Indian Bench; Tonya Navanick, Arizona; 26 grandchildren, 1 great-grandchild; brothers and sisters, Richard “Bud” Powaukee, II; Alene Powaukee, both of Lapwai; Donald “Toosh” Powaukee, Spalding, ID; Edith Powaukee, Lapwai; Kris (Paula) Powaukee, Pendleton, Oregon; and numerous nieces, nephews, and other relatives.
He was preceded in death by his wife, Vivian, and a daughter, Margo.
Funeral services will be on Monday, June 18, 2018, at 10:00 a.m. at the Ft. Duchesne Gym.  There will be a wake after 4:00 p.m. on Sunday at his home.
Burial will be in the Ft. Duchesne Cemetery.

To order memorial trees or send flowers to the family in memory of Daryl "Butch" Lewis Powaukee, please visit our flower store.