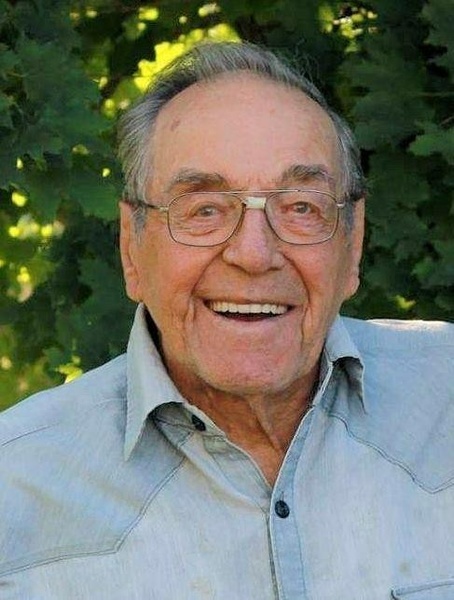 Dale Edward Workman, age 93, of Duchesne, passed away peacefully after a long, happy life on December 24, 2018. He joined his eternal companion, Ella, and many other family members on Christmas Eve morning.
Dale was born to Charles and Mary Tolton Workman on March 12, 1925 in Manila, Utah.  His mother passed away before his first birthday. His Father, being a single Dad, found comfort in placing Dale with relatives Con and Barbara Wilkerson, of Neola.
He joined the United States Marine Corps (8-6-1943) at 18 years of age. He proudly served in the South Pacific during WWII.
Dale returned home after serving and fell in love with Luella Ames. They were married March 26, 1946. Their marriage was solemnized in the Salt Lake City Temple on November 20, 1984. They were married for 70 years.
Dale was a member of the Church of Jesus Christ of Latter-day Saints. Dale and Ella worked in the Vernal Temple until their health would not allow it.
They were blessed with 7 children. Chella (Gerald) Wilkerson , Duchesne; Dan (Jeanie) Workman, Riverton, UT; Gary Workman, Cheyenne, WY; LuAnn (Steve) Fowls, Jeff (Mary) Workman both of Moorcroft, WY; Ronna (Kirk) Vandaver, Victor, CO; and Kevin (Angella) Workman, Duchesne.
Dale was always a good provider for his family and enjoyed working in many different fields including the Mayor of Duchesne City, Duchesne Motor & owner of Texaco service station also in Duchesne. He was an avid BYU sports fan and had many hobbies and talents.
Dale loved people with his whole heart. He considered his family his greatest blessing and made every member feel like they were his favorite. He treated those around him with fairness, faith and kindness. He is survived by 7 children, 6 in-laws, 45 grandchildren, 90 great-grandchildren, 24 great-great grandchildren; sister, Violet Wilkerson Voss, Hurricane; sisters-in-law, Kay Nyburg, Sandy; Eva Ivie, Duchesne; Donna Wilkerson, Hurricane; and Jewel Workman, SLC.
He was preceded in death by his eternal sweetheart Luella Ames Workman, both sets of parents, his brothers, Norman Workman; Arbon, Woodrow, and Carl Wilkerson,  sisters, Beth Cudney , Lula Workman, and grandchildren, Cheryl Wilkerson, Mathew Workman, great-great grandson, Milo Coleman.
Funeral services will be held on Saturday, January 5, 2019, at 11:00 a.m., at the Duchesne Stake Center of the Church of Jesus Christ of Latter-Day Saints.  A viewing will be held from 9:30 - 10:45 a.m. prior to the services.
Burial will be in the Duchesne City Cemetery, with military honors presented by the Duchesne American Legion Post #22, and the Marine Honor Guard.

To order memorial trees or send flowers to the family in memory of Dale Edward Workman, please visit our flower store.