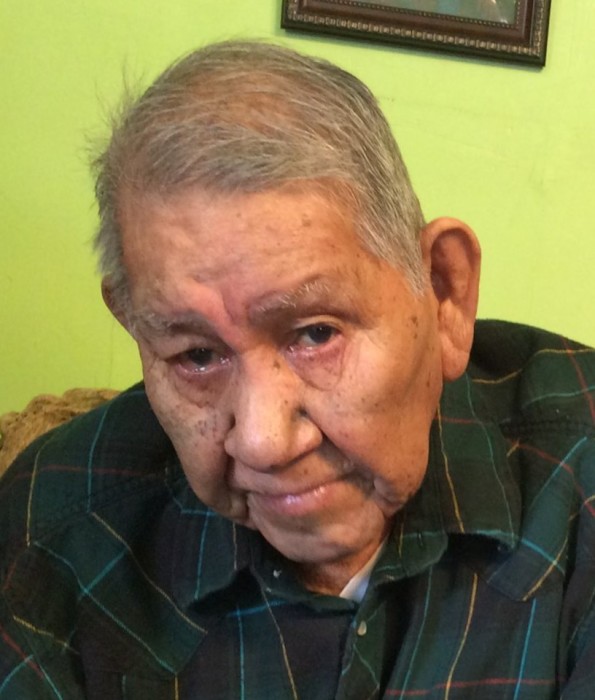 Curtis William Cuch, age 89, of Whiterocks, passed away June 6, 2018, at the home of his daughter, Gwen Cuch.
He was born January 30, 1929, in Ft. Duchesne, to Charlie Cuch Sr. and Evelyn Grant.  He married Laura Nephi and they later divorced.  He married Geraldine Jane Bush on May 10, 1954, in Ft. Duchesne.  She died April 21, 2017.
Curtis served in the US Army during the Korean Conflict.  He was a rancher all of his life and loved his many horses.  In his younger days, he competed in rodeos in the Team-Roping event.  He enjoyed fishing, reading the newspaper every day, doing puzzles, and playing handgames.  He was a Sundancer and a Sundance Singer and a very traditional, spiritual man.  He liked to tease, but when he meant business, you’d better pay attention.  He was involved in Tribal Politics, being a very outspoken man who wrote many letters to get his voice heard.  He was a very smart man who had excellent handwriting.  He loved his family and especially adored his grandchildren, giving them all an Indian name.
He was a member of the Episcopal Church.
Curtis is survived by his children, Doreen Colorow, Ft. Duchesne; Delphina Cuch, Phoenix; Kelly (Barbara) Cuch, Aaron Cuch, both of Indian Bench; SueAnn (Jubenal) Esquibel, Ft. Duchesne; Gwendolyn Cuch, Ballard; Bill Cuch, Randlett; Kim Cuch; 23 grandchildren, 40 great-grandchildren; a sister, Ina Nephi, Ft. Duchesne; and numerous nieces and nephews.
He was preceded in death by his wife, Geraldine; three sons, Sterling, Blaine, Stanley; a daughter, Ruth Allen Cuch; grandchildren, Leticia Cuch, Erika Alanis, Marlane Cuch, Evan Cuch, and a great-grandson, Daylynn Cuch.
Graveside services will be held on Saturday, June 9, 2018, at 10:00 a.m. at the Washington Cemetery.  There will be a wake at his home in Whiterocks after 4:00 p.m. on Friday.   Military Honors will be presented by the Ft. Duchesne VFW and the Utah National Honor Guard.

To order memorial trees or send flowers to the family in memory of Curtis William Cuch, please visit our flower store.