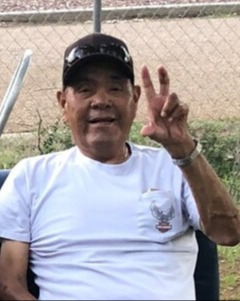 D. Cris Cesspooch, age 59, of Ft. Duchesne, died on Sunday, October 16, 2022, in Murray, Utah
Cris was born on December 25, 1962, to Roy Bird and Karen Williams Brock Cesspooch. He married Connie Murray, and they later divorced. He married Nonie Sireech, and they later divorced. He married Melissa Hutchins, and they later divorced. He had a companion to Delthina Tso for the last twelve years and he had a special name of “Babe” for her.  He liked to tease around with grandkids, especially Ricky Palmer.
Cris was a man of the outdoors. He loved to go camping, hunting, fishing, boating, and working in his yard. He enjoyed working with his hands and with tools and was always staying busy. He liked gambling in Wendover and was a good fry bread maker. He worked as a heavy equipment operator, even operating a bulldozer as a wildland firefighter. Cris owned a trucking company - “Cesspooch Trucking”.
In his younger days, Cris did rodeo and was a bull rider. He liked riding motorcycles and collected several bikes. He helped raised his nephew, Zander, and loved being with his family, especially having everyone gathered around a campfire.
Cris is survived by his wife, Delthina Tso, children, Justin and Alazay Cesspooch, siblings, Beverly (Collin) Mojado, Art Cesspooch, Alisa Cesspooch, and Roberta Cesspooch; several nieces and nephews, and many other relatives.
He was preceded in death by his parents, son, Roycen Cesspooch, brothers, Roy Bird Cesspooch, Jr. and Steven Cesspooch.
A wake will be held on Wednesday, October 19, 2022, after 4:00 PM at his home in the Richardson Subdivision. He will be viewed at the Hullinger Mortuary on Tuesday from Noon - 4:00 PM and Wednesday beginning at 10:00 AM.
Following the wake he will be cremated.

To order memorial trees or send flowers to the family in memory of Cris Cesspooch, please visit our flower store.