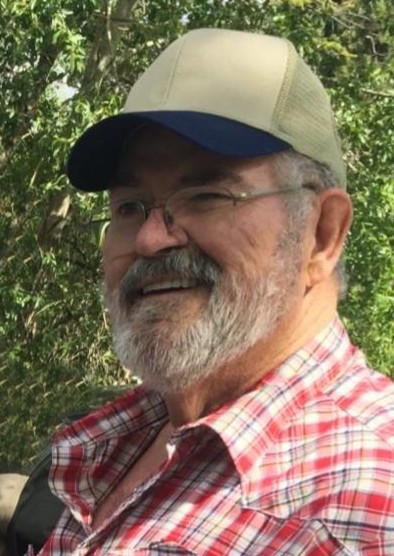 Clayton Leo Thompson, a loving husband, father, grandfather, brother, uncle, and friend passed away on May 17, 2019 at his cabin in Hanna, Utah. He was 75.
“Clay” was a mountain of a man with a bold, outsize personality that matched the landscape he loved. Even as a young boy he wore cowboy boots, Levi jeans, and a hat. He never forgot “Tony” the first horse he  raised, rode, and cared for while growing up on a small farm in North Salt Lake, Utah.
Clayton was born in Salt Lake City on October 11, 1943 to Alice Moss Thompson and Thomas Clayton Thompson. He married Karen “K.B.” West on April 13, 2007 in Rangely, Colorado. After residing in Duchesne together for nearly eleven years, they moved to Mesquite, Nevada. (He was preceded in death by his first wife Coleen Hill).
In a lifetime of hard work, Clay both maintained ranch land and was a proud member of Utah Pipe Trades Local 140, traveling throughout the US, pipefitting, welding, and making friends for life.
Clayton loved racing—horses as a boy, then motorcycles as a young man. He climbed the hill known as “The Widowmaker”  several times and was a member of the Bees Motorcycle Club.  He later realized he loved more horse-power and higher speeds found in cars. Clay started drag racing in the sand. Along with 2 partners, he owned two cars for sand drag racing. All events were spent with close friends and family and often held at the Great Salt Lake beach.
Clay loved fishing (the big ones always got away Judy) and was an avid hunter. Elk hunts with family and friends around Utah and Colorado were legendary. Never was a campfire lit without Clay telling captivating stories. Plenty of salty language was sprinkled in the tales.
On his ranch, Clay loved caring for horses, cows, and chickens. In recent years when asked why he still kept so many horses if he seldom rode them, Clay explained, “Because I like to look at ‘em!” He was fond of animals and birds. In Mesquite, he filled bird feeders so he could watch a variety of birds swoop in to fill their beaks.
It was on a road trip when Clay proposed to K.B. with a “2-carat diamond” ring bought at a Flying J gas station.  “She told me it looked like a million bucks, so I had to admit it was a fake. Eventually I made good on the exaggeration.”
Clay is survived by loving wife, Karen Thompson, two children, Christine (Thomas) Jensen, Huntington, Utah; Carl (Linda) Thompson, Orangeville, Utah.  Also surviving brother, Dwayne J. (Norma) Thompson and two sisters, Judy M. Harrison (Brent) and Susan K. Cooper (Jerry). Clay loved his grandchildren: Jason, Mark (Ashleigh) and Colton Jensen all of Huntington, Utah; and Katlin (Carrie) Jensen, Malad, Idaho; and little buddy, Stevie Coulter.  Great grandchildren are Ryatt Roy & Kanyon Clay Jensen and Payton. And adored: Little Shayla. Survived by stepchildren Craig, Jeremy, and Jenna.
Preceded in death by his parents and brother M. Joe Thompson and Joe’s wife Daryl.
Dad, to us you’ll always be “Double Purple Tuff”.
The porch at the cabin and the ranch will not be the same without you, Clayton Thompson. We thought there would be more years ahead and stories to share.
Family and friends are welcome at Clay’s  Celebration of Life on Saturday, June 15, 2019, Defay’s Ranch, 2:00 thru the night.  For cabin or RV Park reservations: 435-848-5590
Dad dwells among the angels now
He left us much too soon
He glides across a golden field
Above the harvest moon
We Love You Dad

To order memorial trees or send flowers to the family in memory of Clayton Thompson, please visit our flower store.