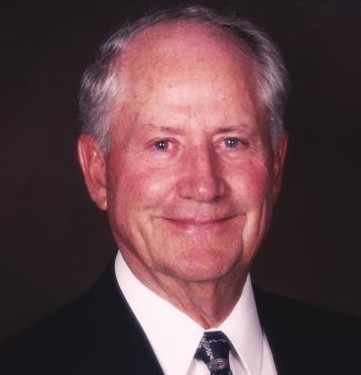 Louis Clark Roberts passed away on March 13, 2018 with his wife Barbara Jean Russon and son Wendell by his side.
Clark was born in a log cabin in Vernal, Utah to Louis Dermont Roberts and Louise Dean. He had eleven siblings, five brothers and six sisters. He became the oldest living son due to the accidental drowning of the oldest brother, Frank Homer when Homer was only 20 months old. This was an important factor in the way Clark lived his life. He felt the weight and responsibility of being the oldest son and tried to always be a good example for his siblings. His diligence bore the fruit of a truly Christ-like love for each of his brothers and sisters. He felt a deep devotion for each of them, and he willingly stood by some during their darkest hours.
Clark loved sports and found joy in basketball and running. He was captain of the basketball team his senior year of high school and took first place in the State half-mile run held in Provo. After high school, Clark joined the Army Air Force during which time, instead of gambling and drinking with the boys, he would run. After the war ended and Clark was honorably discharged, he ran for BYU and won the mile run over the more experienced Utah “Ute” that was expected to win. This was something he talked about throughout his life. Possibly the fact that his father witnessed the win and was in tears because he was so proud of his son, is why he so loved retelling the story. He once wrote “for me personally, getting a compliment from my Dad was worth any kind of sacrifice.”
In 1947, Clark was called to serve an LDS mission in Argentina. He left by boat from New Orleans and arrived in Buenos Aires on May 28, 1947, his 21st birthday. While serving in the mission field, Clark learned to play the organ, to speak Spanish and most of all, to love the Argentine people. Throughout his life he spoke Spanish whenever he could.  He especially enjoyed speaking Spanish with his sons that also learned the language during their time in the mission field.
On September 5, 1950, Clark married the love of his life, Barbara Russon of Roosevelt, Utah in the Salt Lake LDS Temple. In 2015 he wrote, “It is almost 2 p.m. and Barbara is taking a nap. I miss her even though she is in the next room. I can’t imagine life without her being close by.”
Soon after being married, Clark moved his family to “the farm” in Pleasant Valley, Utah. Here he and his family turned the desert into a beautiful farm. During this busy time and at the young age of 27, he was called to be bishop over the Myton Ward. But of all the callings Clark had in the church, he considered being choir director his favorite calling. He loved playing and teaching organ to other members of the ward family and loved going to organ recitals at the historical Tabernacle on Temple Square. He had a great love for the Tabernacle organ because his great-grandfather, Joseph Ridges, built it. From 1965–1992, Clark was the Myton City postmaster.
Clark wrote, “As a ninety-one year old man, hanging onto what life I have left, at this state, I can really appreciate how precious life is.”
Clark lived a full life. He laughed often, helped anyone in need, and faced every challenge with courage, faith and optimism. He truly loved everyone around him and taught his children to see the good in everything and in everyone. These qualities gave him the ability to positively change and influence the lives of those around him. He will be missed and loved by everyone fortunate enough to have known him, until we meet again.

Clark is survived by his wife Barbara and their seven children, Evelyn (George) Johnson, John Clark (Karen), Jean Israel, Wendell Louis (Shanna), Frank Howard (Carolyn), Wendy Sue (Leigh) Willis, and Neil Joseph (Alison); his brothers, Lowell and Bill, and sisters, Mary Lou, Edie, and Ruth; 34 grandchildren and 37 great-grandchildren.
He was preceded in death by three children that died at birth, Paul David, Dermont Coray and Elizabeth; his parents, Louis and Louise Roberts; his brothers, Homer, Dean and David and sisters, Florence, Rhea and Joyce.
Funeral services will be held on Tuesday, March 20, 2018 at 11:00 a.m. at the Roosevelt LDS Stake Center with a viewing held from 9:30 - 10:45 a.m.
Burial in the Vernal Memorial Park at 3:00 p.m. with military honors presented by the American Legion Post #11 & #124 and the Army National Guard.

To order memorial trees or send flowers to the family in memory of Clark Roberts, please visit our flower store.