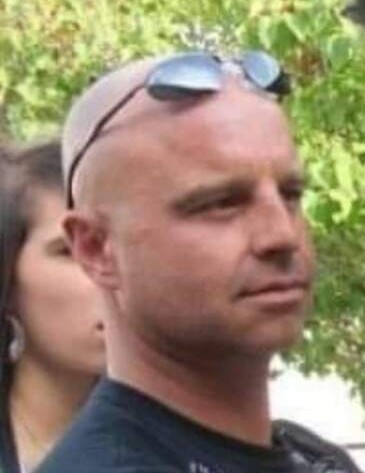 Chad Aaron Hill, age 49 of Roosevelt, passed away March 8, 2021, at his home.
He was born on August 10, 1971, in Salt Lake City, to Robin Hill and Catherine Hill Page. He married JoAnn Markham on September 27, 1991 and their marriage was solemnized in the Manti Temple on June 13, 2003. They had three children, and later divorced.
Chad spent the last five years making a life with his companion, Maren Bennion.  They made many adventurous memories together.
Chad has worked as a cook, auto body painter, fabricated hot oilers, worked various jobs in the oilfield, volunteered as a firefighter (which he took great pride and satisfaction in doing), and did auto body work on old Kaiser cars. He LOVED to cook and BBQ. His hobbies were building model cars, painting, pinstriping everything he could get his hands on, collecting knives, shooting guns, and  fishing.  He bred and sold fresh-water fish and had multiple fish tanks throughout his life.  He really liked going on drives, especially on the first snow fall. He loved his many dogs and passed that love to his children. Chad is and was an AMAZING man and father. He was a great friend to so many people. He will be greatly missed. His heart was in the right place. He did many great things but none greater than raising his three beautiful children! He, along with his wife, taught his children their drive, work ethic, and gave them their BIG hearts. He taught his children to NEVER give up in life no matter what, and he himself never gave up. He was a great role model, and never gave up on his children or anyone that he loved. His children are very proud of him!
Chad was a member of the Church of Jesus Christ of Latter-day Saints, and served as a counselor in the Elders Quorum, helped with the Boy Scouts, and was an Elder in the Melchizedek Priesthood.
He is survived by his companion, Maren Bennion, of Roosevelt; his son, Harley Aaron Hill, Roosevelt; daughters, Fierra Nila Hill, Altamont; Makale Rae Hill, Roosevelt;  five grandchildren, Nina, Leela, Arabella, Chad Van, and Kinzlee Bird; brother, Brian (Karen) Hill, Upalco; niece, Brigget (Kelly) Wisener, Roosevelt; and two nephews, Dam’n Hill, Richfield; Alex (Breann) Hill, Tabiona; five great-nieces and -nephews; parents, Robin Hill, Boneta; Catherine Page,Washington City.
He was preceded in death by his step-mother, JoLynn Hill; step-father Jeff Page; and his baby puppies, Tequilla and Shaka.
Funeral services will be held on Monday, March 15, 2021 at 11:00 a.m. at the Roosevelt West Stake Center (150 S Skyline Drive).  A viewing will be held that morning from 9:30 - 10:45 a.m.  Due to COVID restrictions, his funeral will be held for immediate family and close friends.  The funeral will be live-streamed here and at the link below.  Burial in the Mountain Home-Boneta Cemetery.

To order memorial trees or send flowers to the family in memory of Chad Aaron Hill, please visit our flower store.