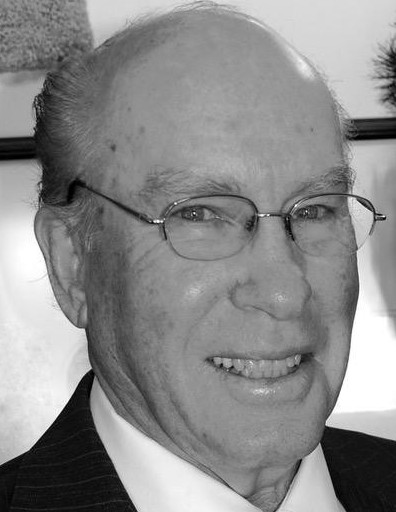 Chad Raoul Evans, our beloved father, grandfather, brother, and friend, age 88, returned to his Heavenly Father on Sunday October 14, 2018. Chad was a man of wisdom with a friendly personality and many amazing talents and abilities.
Chad was born February 14, 1930 in Boneta, Utah to Ward and Elzada Fietkau Evans.  He married Betty Lee Holgate, the love of his life, in the Salt Lake Temple on November 24, 1948. Besides living in the Uintah Basin, he has resided for a time in Salt Lake City, Provo, and LaGrande, Oregon. They loved raising their children in the beautiful Pacific North West.
Chad was a people person with a quick wit and a fun personality. He could tell the best stories and loved sharing them with his family and friends.  He had a beautiful tenor voice and would whistle or sing wherever he went.  Chad was one of those guys who could do anything and do it well!  He relished the challenge of taking something broken or of little value and turning it into a prized show piece. With a brilliant mind for figuring things out, he could build or repair anything. He loved the scriptures and books – particularly anything with a cowboy theme – and he was an exceptionally fast reader with an active mind and intellect throughout his life. Chad had a gift with animals from the time he was young and had a special love for horses. He loved his work with livestock as well as his work in the health care profession in Roosevelt and at the Grande Ronde Hospital in LaGrande, Oregon. During the last years of his life he gained great joy in growing and sharing his incredible garden.
He was an active member of the Church of Jesus Christ of Latter-Day Saints and served in many church callings including Bishop’s Councilor, Stake High Councilor, and Stake Young Men’s President. Chad and his wife Betty served a mission to Adelaide, Australia as well as a six-year Native American mission. They had great love for the people they taught and served.
Chad will be remembered for his powerful testimony of the gospel of Jesus Christ along with his profound wisdom that will be treasured by his posterity for generations to come.
Chad is survived by his children Dr. Keith (Sharon) Evans of Roosevelt; Sherry Peterson, Kanosh; Chad Troy Evans, Tooele; 10 grandchildren, 24 great-grandchildren, brothers Forrest Evans (Luella), Conrad Evans, Val Evans (Joyce), sisters Eloise Gatherum (Dawn), Kathreen Thimmes (Terry), sister-in-law Donna Evans, and numerous other relatives.
Chad was preceded in death by his wife Betty, their infant son Tony Chad Evans, parents Ward and Elzada Evans, brothers, Gordon, Kent, Wendell, Burke, and Gayle, sisters-in-law Beth Evans and Pat Evans, a great-granddaughter Lucie Bell, a grandson-in-law Robert Medve, and a son-in-law, Robert Peterson.
Funeral services will be held Saturday, October 20, 2018 at 11:00 a.m. at the Roosevelt 11th Ward LDS Chapel, 250 West 200 North, where a viewing will be held  9:30-10:45 a.m.
Burial will be in the Roosevelt Memorial Park.  Condolences may be shared at www.hullingermortuary.com
The family would like to thank the homecare and hospice angels in Roosevelt and Millard County.  A special thank you to Chris Livingston. We extend our love and appreciation to Hal Winterton, Bill Johnson,  Jordan Lindsey, and Tony Pedro who were devoted friends to the end. We would also like to thank Richard and Wilma Snow who have been the most loving and devoted neighbors.

To order memorial trees or send flowers to the family in memory of Chad Raoul Evans, please visit our flower store.