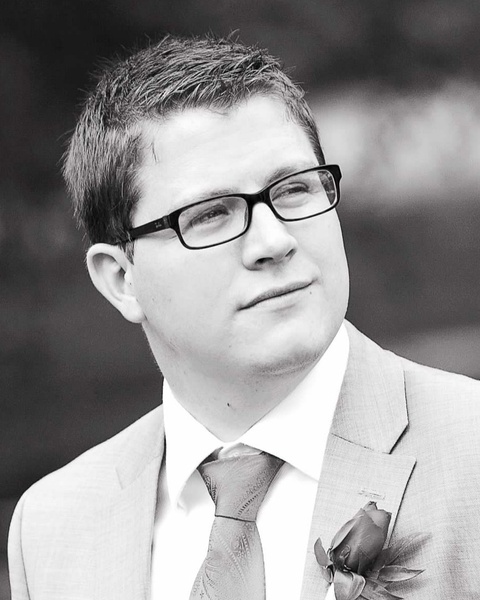 Our much-loved husband, father, son, brother, uncle, nephew, and friend, Carson Ray Buxton, age 31, passed away surrounded by family on September 21, 2022, after a courageous 22-month battle with brain cancer.
Carson was born on January 2, 1991, in Roosevelt, Utah, a miracle baby who was joyously welcomed by his parents, Carmen Leslie Coleman and James Chris Buxton, and two older sisters, Jamie and Wrandi.
From the beginning, Carson was a happy, thoughtful, rambunctious ray of sunshine who brought light and joy to all those he knew. He had a knack for seeing those around him and making them feel special. His example of faith, unconditional love, and friendship showed us what it is to truly emulate the Savior’s love.
As the baby of the family, he was called Sweetheart so often that he spent his early years thinking that was his real name.
He attended Union High School in Roosevelt and was involved in many activities including sports, German Club, scouting, and Seminary Council. Always a social butterfly, his circle encompassed everyone. He was genuine and known for his great sense of humor.
Carson served a full-time mission in Yekaterinburg, Russia, for The Church of Jesus Christ of Latter-day Saints, where he made many life-long friends and was a light to all those around him. It was during his mission that Carson first met Amy Dawson who was also serving a full-time mission and would later become his wife.
After his mission, Carson attended Utah Valley University where he earned his B.A. in International Business with a minor in Russian. During this time, he reconnected with Amy, and was smitten, telling his family, “That’s the girl I’m going to marry”. She was the love of his life and they were married on June 1, 2013, in the Nauvoo Temple. Thus began a beautiful life together. They enjoyed sports like racquetball and tennis, game nights with family, traveling, and trying new restaurants.  Their greatest adventure together was parenting their two beautiful children, Wesley and Rose. Carson adored being a father and spending time with his family. A few of their favorite memories together include playing Jaguar and Monkey in the backyard pool, hikes in the woods, Sunday family movie nights, and weekend zoo trips, complete with breakfast at McDonald’s.
Carson enjoyed his career, which began in tax operations for Goldman Sachs in Salt Lake City, UT.  After four years, he was recruited by Wells Fargo in Charlotte, North Carolina, where his colleagues playfully referred to him as “The Golden Boy”.  Throughout his life, Carson was an exceedingly hard worker and excelled in any endeavor he took on. In keeping with his nature, he met many people who became close friends throughout his career. He cherished these friendships.
Although Carson’s life was tragically cut short, he had an amazing attitude and his personality shone through all of his trials. He had a sweet, teasing nature that made people laugh and feel good about themselves. People were instantly drawn to him and he had a way of connecting to people that made them feel loved.
He is survived by his wife, Amy; children, Wesley and Rose; Mom and Bonus Dad, Carmen and Guy Coleman; Sisters, Jamie (Nate) Nelson and Wrandi (Tyson) Hummer; step siblings, Guy Coleman Jr., Jocelyn (Mike) Rechenmacher, Sierra (Ryan) Isaac, and Abilene (Andrew) Bosco; Grandmother Eileen Taylor; Parents- in-law Jeff and Lori Dawson; many nieces, nephews, aunts, uncles, cousins, and friends.
He was preceded in death by his father, James Chris Buxton; Grandparents, Sheldon Taylor and Terry and Diane Buxton.
Funeral services will be held at 2738 S Filmore St, Salt Lake City, UT 84106, (The Church of Jesus Christ of Latter-day Saints Stake Center), on Saturday, September 24, 2022. The visitation will be from 2:30-4:30 pm, followed by a memorial service from 5:00-6:00 pm. All are welcome. For those unable to attend in person, the memorial service will be streamed through the following link: https://zoom.us/j/97513087304. Interment to follow at a later date.
In lieu of flowers, please consider the following options:
Rose’s College Fund: https://gift.my529.org/ZY2Q1U
Wesley’s College Fund: https://gift.my529.org/L9J2GW
Essence of Life Hospice: https://essencehospice.com/donate/
University of Iowa Adolescent and Young Adult Cancer Program: https://donate.givetoiowa.org/s/1773/giving/19/interior.aspx?sid=1773&gid=2&pgid=509&cid=1288&dids=294.&appealcode=GFWEB