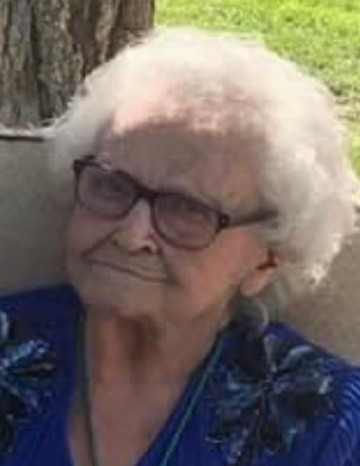 Carol Anne Croce, age 86, of Roosevelt, known to most as “Nana,” passed away  April 8, 2020, – The Night of The Pink Moon – at the Uintah Basin Sr. Villa, with her devoted husband, Mario “Pops” Croce at her side.  It seems so fitting that she passed on the night of the pink moon: going home to be with her three daughters that preceded her in passing
Carol was born January 1, 1934, in Oak Park, Illinois, to John J and Florence Keener Higgins.  Carol married Mario Frank “Pops” Croce and they celebrated 65 years of marriage last May. Carol loved being a wife and was a wonderful mother to their five children.  She became “Nana” as grandchildren and great-grandchildren were added to the family.
“Nana” was known for her love of crafts, crocheting, needlepoint and recently creating Diamond Dots pictures. Every family member has a personalized Christmas stocking handmade by her. Every year it seemed that there would be new additions to the family and she would make them theirs.  Sadly, Carol’s crafting took a major downfall when she fell and broke her neck four years ago. She had to have it fused, but was not paralyzed from it although it did affect the right side of her body.  She was so strong learning how to walk again and eating left handed. With her strong desire to be back to crafting and a lot of rehab, she was using her right hand crocheting beenie hats the following Christmas.
Besides her love of crafts, she also loved Genealogy. Being a longtime member of Ancestry.com, she would help anyone that wanted to know their family heritage.  She would often be researching their family tree for sometimes weeks at a time.
Carol was of Irish decent and so her favorite holiday was St. Patirick’s Day. When her children were little she even dyed their diapers green.  She enjoyed watching old Irish movies and the Celtic Dancers.  So with Irish music playing, we said our final goodbyes to our amazing wife, mother, and grandmother.
Carol is survived by her husband Mario; her daughter, Anita Kelly; her son, Mario (Jodie) Croce; extended children, Cliff Conover, Ed Puckett, and Leanne Jones Snyder; grandchildren and great grandchildren, Micki Arguello and her two children Meggan and Desean; Tawnya Clovis and her son Kai; Rhiannon Garcia and her son Gabriel; A.J. Croce and son Kai; Eddie Puckett and son Zayne; Chris and Megan Puckett and son Landen; Brandon and Megan Jones and their three children; Desiree and Heath Williams and their two daughters, Lexi and Abby; Brianna Snyder, Kody Conover, and Jordan Barnard.
She was preceded in death by her daughters, Suzi DeMichael, Kitty Conover and Diana Barnard.
Per her wishes, she was cremated and a memorial service will happen at a later date.

To order memorial trees or send flowers to the family in memory of Carol Anne Croce, please visit our flower store.