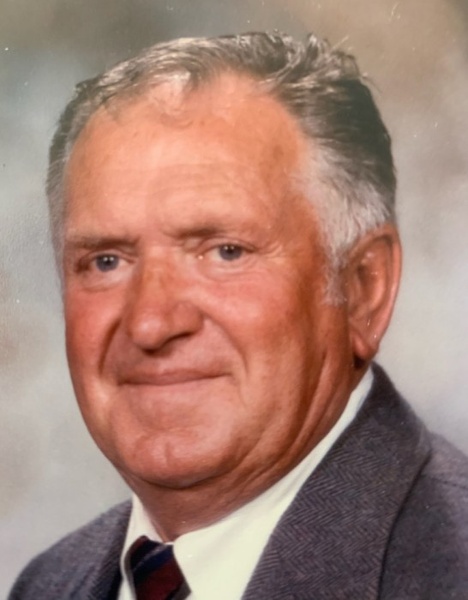 Calvin Philyp Powell, age 79, of Vernal, formerly of Bluebell, returned to the arms of our Loving Heavenly Father surrounded by family, on April 30, 2020, in Vernal.
He was the last born to James William and Leah Vivian Ewell Powell on September 28, 1940, in Bluebell.  Being the baby of fourteen children, he learned to work at an early age, as most of the boys had left home by this time.  He taught his children the value of hard work.  He graduated from Altamont High School, after which he left the family farm and went to work for Kencott Copper mine.  He married Gayle Ostler, of Sandy, UT, and had two children from this marriage, which later ended in divorce.  He then went to work at Freeport Center, American Linen, and Safeway Warehouse, working around the clock on three jobs.  He was very energetic and always tried to better himself.
Calvin met the love of his life, Janet Brough at a dance, and he couldn’t take his eyes off her. They were married in Avalon, Utah, and their marriage was later solemnized in the Provo Utah Temple.  He went to work for Mountain Fuel and worked there until his four children were born and then he decided he wanted to raise them on the farm.  So we moved to Bluebell.  He went to work for Moon Lake Electric and was there through retirement.  He absolutely loved that job.  We had one more child, Ronald Myron, after moving there.
He was known as the best cook around when he made his homemade chicken noodle soup, which the children and grandchildren always had to have when they came home.  When we had visitors, family, or a salesman off the street his greeting to them was, “come on in, sit down, are you hungry?”  No one ever left his house without an offer to cook dinner for them.
He served as ward clerk, scout leader, activity director, and home teacher in the Bluebell Ward.  He also coached the basketball and baseball team.  He loved to fish, hunt, or just play a good old game of kick the can in the yard with his family.  He loved the mountains, and so our annual deer hunt with the family was on his list of priorities.  His favorite place to go was Burnt Mill Springs.  He loved to plant a big garden every year and he shared it with everyone.  His yard was well manicured every summer, he loved the outdoors, and he wanted everything to look nice.
He is survived by his wife, Janet, of 54 years, daughter, Sheli (Curtis) Allred, Vernal; sons, Michael (Christy) Powell, Midway; Dennis Powell, Ronald (Simone) Powell, Las Vegas; daughter, Charlene (Jimmy) Louder, West Jordan; and son, Jeff (Tonya) Powell, Murray;  brother, Bill Powell, Midvale; 15 grandchildren, and 5 great-grandchildren.  And last, but not least, his dog, Puppy.
He was preceded in death by an infant daughter, Bonnie Jean, his parents, James and Vivian; parents-in-law, Myron and Hazel Brough; sisters, Maureen Smith, Verona Gonzales, LaVern Gordon, Ruth Christensen, Mildred Hillabert, Lucy Timothy, Ardith Russell, Vernice Howe, June Roper, and Donna Rae Ewell; brothers, Carl and Albert Powell.
Graveside services will be held on Monday, May 4, 2020, at the Bluebell Cemetery at 12:00 Noon.  A viewing will be held 1 hour prior to the service at the cemetery.
Condolences may be shared at www.hullingermortuary.com.

Due to the COVID-19, all services and viewings are limited to family and close friends, please use your discretion.

To order memorial trees or send flowers to the family in memory of Calvin Philyp Powell, please visit our flower store.