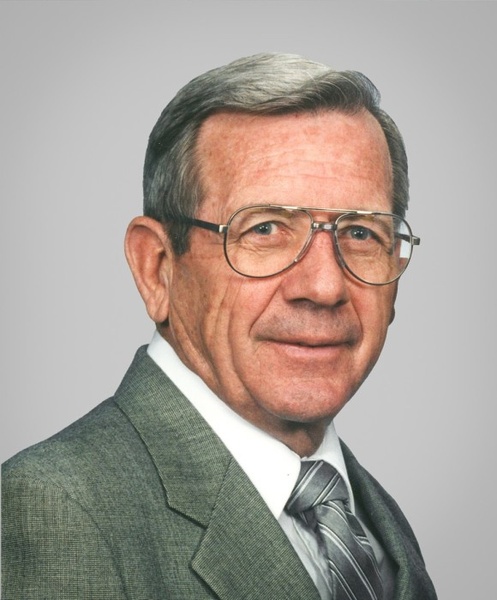 Burr Salmon “Coach” Eldredge, 93, passed on Sunday, September 29, 2019 at his home surrounded by his wife and family.
Born at home in Myton, on November 28, 1925, the son of Joseph Harold and Erma Salmon Eldredge, he was a lifelong resident of the Uintah Basin. In his early years, Burr lived in Myton and Altonah before moving to Duchesne. He began working in his family gardens as a child.  He later worked in the stores where his father worked. Often people would call the stores with messages for families which Burr would deliver on foot. He also helped harvest ice, worked at a local service station, hauled manure, did yard work, worked as a hay bailer and other farm work, often for very little pay as the Depression was just ending. Later he worked in timber and loved it. This led to a job with the Forest Service fighting fires, clearing trails, maintaining phone lines, and pulling fence.
Burr graduated from Duchesne High School where he was student body president in 1944. Upon graduation he joined the U.S. Army and was sent to Germany. After World War II, Burr attended Brigham Young University studying Physical Education, and it was there that he met his wife, Jean Knecht. They were married in the Salt Lake City Temple in 1950, and he graduated in 1951.
After Jean graduated in 1952, they returned to Burr’s beloved Uintah Basin where Burr became a teacher at Roosevelt Junior High. He taught physical education, math, history, and health. He also found great joy in coaching multiple sports, and many residents knew him simply as “Coach.” He retired in 1987. In addition to teaching he directed Roosevelt’s youth recreation programs and built cabinets.
Burr gave dedicated service in many capacities in The Church of Jesus Christ of Latter-day Saints, including scout master, home teacher, ward and stake clerk, and bishopric counselor. He loved serving in the temple, and served in the Provo and Vernal temples for decades and loved the associations he made there. He and Jean also served as senior missionaries in the England London South Mission.
He was an avid outdoorsman and enjoyed hunting, fishing, camping, hauling wood or just going for a drive.
Burr leaves his wife of 69 years, Barbara Jean Knecht Eldredge; his sisters Eva Eldredge and Renae Powell; and his children. Lloyd Eldredge (Paula Hale), Mikelene Hinckley (Scott Hinckley), LaMar Eldredge (Julie Wills), Scott Eldredge (Debbie Hill), Bryan Eldredge (Julie Gergely), and Barbara Rees (Lynn Rees) as well as 25 grandchildren and 38 great grandchildren.
He was preceded in death by his parents, sister Orba Pearce, brother Harold Eldredge, sister Erma Hogan and gradson Andrew Curtis Eldredge.

In lieu of flowers, the family requests that donations be made to The Church of Jesus Christ of Latter-day Saints Temple Construction Fund.

To order memorial trees or send flowers to the family in memory of Burr Eldredge, please visit our flower store.