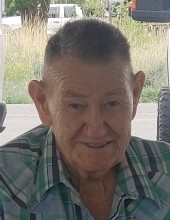 Boyd Ruben Braithwaite, age 82, of Myton, passed away in the comfort of his home surrounded by his loved ones on Friday December 18, 2020. He died from acute myelodysplastic syndrome, a form of cancer.
He was born in Manti Utah on July 5, 1938. During his lifetime he had many accomplishments. When he was 17 he served for his country in the Army, where he would be later honorably discharged. At the age of 19 he would marry the love of his life, and have a 62 year long courtship. When he was 24 he began working for the union on road construction. Working on road construction would add many ventures to his life traveling and touring the country. He retired from the union 37 years later in 1999. Then when he was 81, he dedicated himself as one of Jehovah’s Witnesses in baptism.
Boyd lived his life with a deep appreciation of family values. He loved spending time with his kids and grandkids and adored his great grandkids as they arrived. He was a sporting gamesman that enjoyed the great outdoors and all that they had to offer. In his down time you could often  find him hunting, fishing, camping, and four-wheeling. From the deserts to the mountains, he enjoyed and appreciated it all. He was a lover of all animals and more especially of his dogs.
Boyd was a hard worker with excellent work ethic, he had a passion for the heavy equipment that he ran and the roads that he helped bring into creation. He advanced to become the number one blade/grader hand in the state of Utah. He enjoyed hosting huge company chicken fries for the men and women working with him. And later he would come to love sharing all the stories and knowledge that he encompassed during those times. Boyd liked to keep an impressive garden with a well maintained house and yard. When he retired he liked spending some of his time exploring the sands of Arizona. Accompanied by some close family and friends. Boyd was regularly surrounded by people that loved, admired and adored him. In his later years he enjoyed trips to the city traveling and reminiscing about the roads that he had made and going out to eat. He was a truly extraordinary man that accomplished a monument in his lifetime. He was a man that was always there, and  willing and ready to help those around him. He touched the lives of many.
Boyd is survived by his wife of 62 years Carla Smith; his oldest son Boyd C and Kelly Braithwaite; his daughter DeAnn Nielsen; and his youngest son Don and Linda Braithwaite. He is also survived by his and Carla's 13 grandkids, Jathan Beltran, Michael Braithwaite, Jared Braithwaite, Shasta Nelson, ShaeLeah Beltran, Tyler Braithwaite, Cordero Beltran, Asencion Einerson, Thomas Braithwaite, Austin Braithwaite, Zachary Braithwaite, Spencer Braithwaite and Dylan Braithwaite. He is also survived by his 35.5 great grandkids. Also survived by his sister, Venice Ann and Greg Miller.
Boyd was preceded in death by his mother, Sarah Venice Poulson and his father, Ruben Henry Braithwaite; mother-in-law, Ida Dee Jackson, and his father-in-law, Donald Bruce Smith.
"He finished and polished my education on becoming the man that I needed to be."  – JB Spurlock
"As I see it he was a great man. One of the best men in my life, that was my life example" – Hector Beltran.
He was loved immensely and will be greatly missed.
Memorial services will be held Friday, January 8, 2021, at the Grace Events Center at 11:00 a.m.  Due to COVID-19, masks will be required,

To order memorial trees or send flowers to the family in memory of Boyd Braithwaite, please visit our flower store.