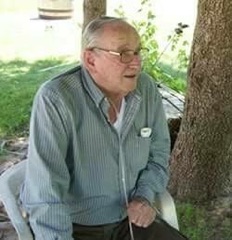 Bobby Newham Bancroft, age 86, died Tuesday, February 20, 2018, peacefully in his sleep at his Orem home.
Bobby was born on October 23, 1931 to George Albert and Callie Augusta Rasmussen Bancroft, in Duchesne, Utah. Bobby had 8 siblings. He also had 6 kids, and a total of 148 grandkids, great-grandkids, and great-great-grandkids.
Bobby entered the Army on January 15, 1952, then on December 10, 1953 was inducted into the Army reserves, and honorably discharged on January 14, 1960.  Bobby married his sweetheart Karine Kofford on May 28, 1954. They were married for nearly 64 years.
Bobby enjoyed fishing, camping, hunting, and being with his family. He was quick-witted and always up for a laugh. One would ask how he was feeling, to which he would always reply, “with my hands”. He could come up with a song for any topic, and had a very contagious smile.
Left to honor Bobby and remember his love are his wife Karine, and daughters Betty (Dave) Jones, Teresa (Terry) Barnhart, Kathy (Jim) Johnson, and Marlene (Jerry) Kelly.
He was preceded in death by his son Bobby Bancroft, and daughter Callie (Randy) Rasmussen.
Graveside service held at the Strawberry Cemetery at 1:00 p.m. on Tuesday, February 27, 2018.  A viewing will be held at the Hullinger Mortuary from 11:00 - 12:15.
Military honors presented by the Duchesne American Legion, Utah National Guard and the Patriot Guard Riders.

To order memorial trees or send flowers to the family in memory of Bobby Newham Bancroft, please visit our flower store.