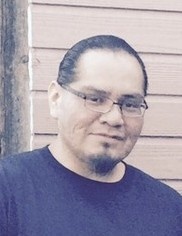 Blake Aaron Nez, age 44, of the Yellowstone Subdivision, passed away October 10, 2020, at his home.
He was born February 18, 1976, in Roosevelt, to Larry James Nez and Venice Shavanaux.
Blake worked as a derrickhand and with the landscaping department of the Ute Tribe.  One of his favorite things to do was eat, especially tacos and Mexican food – he’d often be “Taco Wasted!”  He enjoyed and was good at woodworking and painting abstract designs.  He and his brother, Eli, would often go to lakes where they would drop a magnet on a string and see what they could bring up.  He also liked to go fishing, shopping in the bargain aisle, helping people, gambling, and gardening, especially growing hot peppers like the “Ghost Pepper” and the “Carolina Reaper.”  He was known for teasing and really enjoyed movie nights with the family.  He loved and was close to his children, grandchildren, and parents. His favorite companion, his dog, “Darling,” was never far away.
Blake is survived by his children, Ivanna Nez (Cameron Labrum), Ft. Duchesne; Blake Aaron Nez, Jr., Treven Nez, both of Whiterocks Road; Kayler Murray, Roosevelt; Brooklyn Nez, Ft. Duchesne; a step-daughter, Alyssia LaRose; grandchildren, Emma Nez, Monse Labrum, and one on the way; a step-granddaughter, Neveah LaRose; parents, Larry Nez, Venice Shavanaux, both of Yellowstone; siblings, Larry Nez, Jr., Harlan Nez, Dotsy Wyasket, Laura Nez, all of Yellowstone Subdivision; Duane Garfield, Richardson Subdivision; and numerous nieces and nephews.
He was preceded in death by his son, Draven Nez; two infant sons, Iran & Trissen; brothers, Eli & Keith; nephew, Elias; and grandparents.
Graveside service will be held on Thursday, October 15, 2020, at 10:00 a.m. at the Ft. Duchesne Cemetery.  There will be a wake after 4:00 p.m., Wednesday, at his sister, Laura’s, home in the Yellowstone Subdivision.

To order memorial trees or send flowers to the family in memory of Blake Aaron Nez, please visit our flower store.